Bihar Assembly Election 2020: The BJP on Sunday released its list of star campaigners for the upcoming assembly polls in the state. 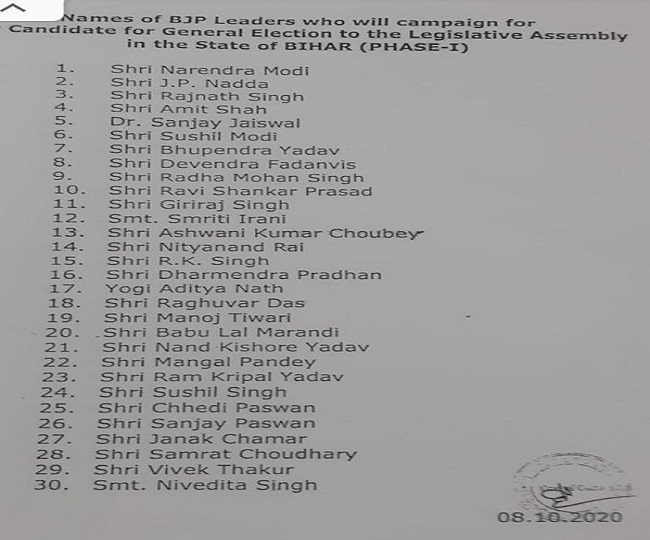 This comes just a day after the BJP held its central election committee (CEC) meeting to finalise its strategy for the upcoming polls in Bihar. Notably, the BJP also released its candidates for the second phase of polling in Bihar on Sunday. The party has fielded some new candidates and has denied tickets to some of the veteran leaders. Reportedly, the BJP is not happy with some its veteran leaders and that's why it has denied tickets to them. Media reports suggest that the seat-sharing formula with the JD(U) was another reason that BJP denied tickets to several party veterans.

According to the seat-sharing formula finalised, the BJP will contest on 110 seats while the JD(U) will field candidates on 115 seats. The BJP will has given 11 seats from its quota to the Vikassheel Insaan Party (VIP).

Meanwhile, BJP President JP Nadda on Sunday kick started the BJP's campaign for Bihar polls at the historic Gandhi Maidan in Gaya. Listing the BJP-JD(U) government's achievement, Nadda lauded Nitish Kumar for handling the coronavirus crisis in the state and said that "new dimensions of development are being written in Bihar and it is our responsibility to drive this development".

"Leadership of India is secured in the hands of Prime Minister Narendra Modi and it is important that the leadership of Bihar is secured with Nitish Kumar," Nadda was quoted as saying by news agency PTI.