The result for the much-awaited assembly polls in the state will be declared on November 10.

Patna | Jagran News Desk: The BJP, which is fighting the elections alongside the JD(U), today released its poll manifesto for the upcoming Bihar Assembly Election 2020. The poll manifesto was released by Union Ministers Nirmala Sitharaman and Ravi Shankar Prasad at an event in Patna. Apart from the BJP, the JD(U), RJD, Congress and the LJP have already released their poll manifestos.

Meanwhile, the Bihar Assembly Election 2020 is the first election to be held in India after the outbreak of the coronavirus pandemic. While the polls will be held in three phases -- October 28, November 3 and 7 -- the result will be declared on November 10.

16:50 pm: It's a Bihar Elections manifesto. Centre makes vaccines available at a minimum price, we promised our govt in Bihar will make it free of cost. Political parties should be sensitive when it comes to public health. We'll fulfill our promise, says Bihar's BJP incharge Bhupender Yadav

Patna: JD(U) releases their manifesto for #BiharElections2020, in Patna. pic.twitter.com/Jo0ZwpXAdJ

13:43 pm: BJP's manifesto promises free Covid vaccine. Like all programs, Centre will provide vaccines to states at a nominal rate. It is for the state Govts to decide if they want to give it free or otherwise. Health being a state subject, Bihar BJP has decided to give it free, says BJP's Amit Malviya

11:43 am: People from Bihar are getting employed in every state of the country due to their skills. There's a lot of growth potential for all. This has been possible as Bihar govt had implemented its previous promises with confidence, says Nirmala Sitharaman

As soon as #COVID19 vaccine will be available for production at a mass scale, every person in Bihar will get free vaccination. This is the first promise mentioned in our poll manifesto: Union Minister Nirmala Sitharaman at the launch of BJP Manifesto for #BiharPolls pic.twitter.com/x4VjVmkA3Q

11:25 am: GDP in Bihar has seen a sharp rise under NDA rule, it has grown from 3% to 11.3% in the state in the last 15 years of NDA govt and not during the 15 years of jungle raj. It was made possible because our govt gave priority to good governance for people, says Sitharaman

11:15 am: I appeal to all the people of the state to vote for NDA and make it win. Nitish Kumar will be the Chief Minister of Bihar for the next 5 years. Under his rule, Bihar will become a progressive and developed state of India, says Sitharaman

11:03 am: In its poll manifesto, the BJP has promised free coronavirus vaccine for all. It has further said that it will make Bihar an "IT-hub".

11:00 am: Bihar is one state where all citizens are politically sensitive and well informed. They know and understand the promises a party makes. If anyone raises questions on our manifesto, we can answer them with confidence as we fulfil what we promised, says Nirmala Sitharaman

10:56 am: It's not important for us who comes from which state with what issues. For Bihar elections, only issues like unemployment, poverty, migration etc. related to the state are relevant, says Tejashwi Yadav

10:55 am: Bihar govt has spent only 60% of the budget. Be it floods or Corona, Nitish Kumar turned away from people of Bihar. Now during election time, on what basis is he going amongst them and asking for votes. All he has done is get everyone beaten with a stick, says Tejashwi Yadav 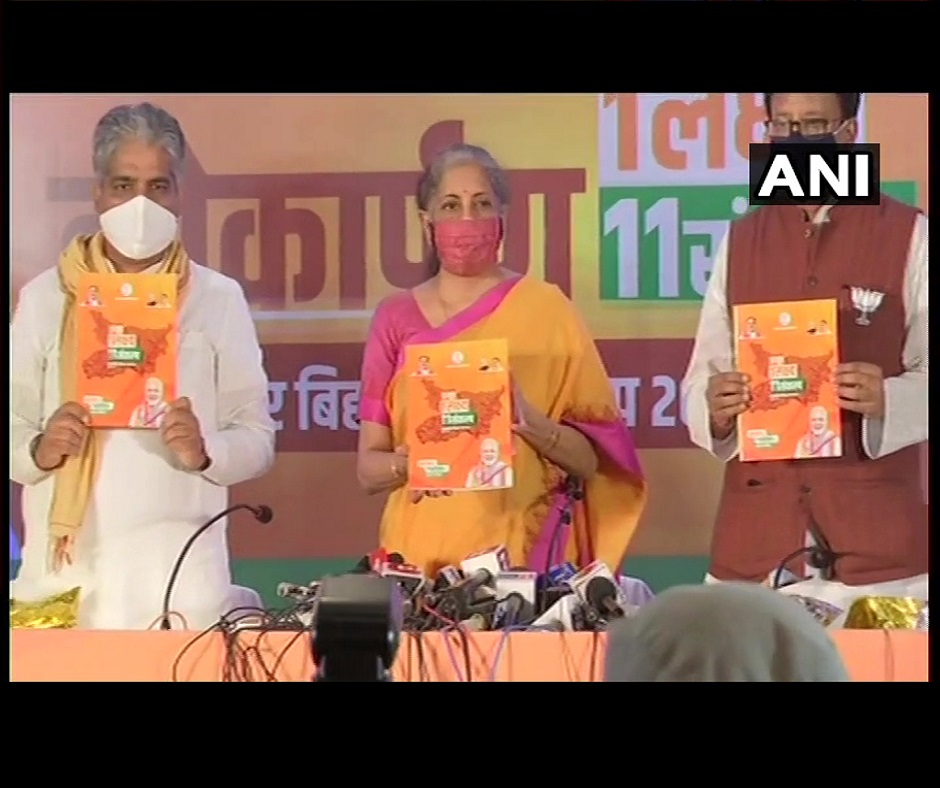 10:09 am: Meanwhile, former Bihar Chief Minister Lalu Prasad Yadav has attacked Nitish Kumar and accused him of betraying the people of Bihar, saying he was given enough chances by them.

9:23 am: This is the first election when my father is not with me. I am alone but I will try my best to live up to your expectations, says LJP supremo Chirag Paswan at Atri Assembly Constituency.

PLT IN SECOND = 0.002871051
Jagran English brings you all the latest and breaking news from India and around the world. Get live English news from India, World, Politics, Entertainment, Lifestyle, Business, Education, Sports, Technology, and much more. Follow english.jagran.com to stay updated with the latest English news.
Copyright © 2022 Jagran Prakashan Limited.