Bihar Assembly Elections 2020 LIVE: While Prime Minister Modi will address three rallies in Sasaram, Gaya and Bhagalpur, Rahul Gandhi will seek votes for the Grand Alliance in Hisua in Nawada and Kahalgaon in Bhagalpur district.

New Delhi | Jagran News Desk: Prime Minister Narendra Modi on Friday addressed his first public rally for the Bihar Assembly Elections 2020 in Sasaram as electioneering for the first phase of voting reaches its final week. PM Modi during his address hailed the jawans of Bihar who lost their lives in the Galwan valley clash in June. He also attacked the opposition saying that how dare those, who are saying that they will bring back Article 370, ask for votes in Bihar, adding that it is an insult of the people of Bihar.

Apart from PM Modi, Congress leader Rahul Gandhi will also be conducting public rallies for Congress' campaign for the upcoming polls. While Prime Minister Modi will address three rallies in Sasaram, Gaya and Bhagalpur, Rahul Gandhi will seek votes for the Grand Alliance in Hisua in Nawada and Kahalgaon in Bhagalpur district.

03:30 pm: They've nothing to show to ask for votes. They say you can buy land in J&K, we've abrogated Article 370. Then they said they will give free vaccines. Today PM Modi had to speak of Article 370 for votes. This govt has failed to solve the issues of this nation: Mehbooba Mufti, PDP on Modi's Article 370 reference during Bihar rally.

03:10 pm: Bihar deserves quality education. Can it be ensured by those who don't even know the value of education or by those who are working 24/7 to bring IITs and AIIMS to Bihar?: PM Narendra Modi, in Bhagalpur

03:05 pm: "Each & every citizen of Bihar must cast his/her vote in the upcoming Bihar Elections, following all COVID19 guidelines & social distancing norms. Also, I will like to appeal to all to 'Go Local' while you shop for the festivals this year, promote local artisans: PM in Bhagalpur

02:50 pm: PM Modi addresses a rally in Bihar's Bhagalpur. He says, "People of Bihar know that it is important to make Nitish Kumar the CM again for faster development of the state. The parties who are today standing against NDA are against the growth of the country."

01:15 pm: The Chinese army martyred 20 of our soldiers and took over 1200 kilometers of our land. When China came inside our land, why did our PM, insulting the heroes, said that no one came inside India. Today I say I bow my head: Rahul Gandhi in Nawada, Bihar.

01:10 pm: Did you guys put your money into banks? Into the pockets of the rich. They told you to fight against the black money. But did you see Adani standing in the queue? No, these people were in their AC rooms. Narendra Modi is making way for India's rich. He is making by siding farmers and small traders. They brought three anti-farmers bills recently, says Rahul Gandhi.

11:45 am: When I as Gujarat CM & Nitish Ji attended UPA's central meetings, Nitish Ji always told them - don't stall Bihar's development. But for 10 yrs, those who were defeated in Bihar were angry, they influenced Centre & ensured Nitish ji cannot work. They wasted Bihar's 10 yrs: PM Modi

11:30 am: NDA govt abrogated Article 370. These people say they will bring it back if they come to power. After saying this they dare to ask for votes from Bihar. Is this not an insult of Bihar? The state which sends its sons and daughters to the borders to protect the country: PM Modi

11:25 am: The people who once ruled Bihar are again looking at the developing state with their greedy eyes. But, Bihar must not forget who pushed them backward, that was the time when there was worsening law & order situation and corruption in the state: PM Modi

11:22 am: Will PM Modi today show the courage to announce special status for Bihar. PM Modi gathered praises but where is Central University in Bhagalpur? PM Modi needs to give a lot of answers to 12 crore population of Bihar: Congress Leader Randeep Surjewala on PM Modi's #Bihar rallies

11:20 am: Voters of Bihar have taken a resolve that they won't let those who have a history of making the state 'Bimaru' come near them: PM Narendra Modi at Biada Maidan in Sasaram

11:16 am: Sons of Bihar lost their lives in Galwan Valley for the tricolour and ensured Bharat Mata's head is held high. Jawans of Bihar were also martyred in Pulwama attack. I bow my head at their feet and pay respects: PM Modi

Sons of Bihar lost their lives in Galwan Valley for the tricolour and ensured Bharat Mata's head is held high. Jawans of Bihar were also martyred in Pulwama attack. I bow my head at their feet and pay respects: PM Modi#BiharElections2020 pic.twitter.com/O7Xw2IyY78

11:12 am: I want to congratulate the people of Bihar for the way they are fighting the battle against #COVID19. The decisions & steps taken by the state govt & people of Bihar against the pandemic are highly commendable: PM Modi at a public rally at Biada Maidan in Sasaram

11:08 am: Bihar lost its two sons recently. I pay my respects to Ram Vilas Paswan Ji, who was with me till his last breath and gave his entire life for the welfare of the poor and Dalits. Similarly, Babu Raghuvansh Prasad Singh ji also worked for the poor. I pay respects to him: PM Modi

11:05 am: Under the leadership of PM Narendra Modi, we've worked for the development of Bihar. If given another chance to serve the state, we'll make sure irrigation facilities & benefits of the latest technology are available at every village: Bihar CM & JDU chief Nitish Kumar in Sasaram

11:03 am: Currently, Bihar is at the 23rd position in crime rate in the country. Our govt has brought in control the law & order situation in the state: Bihar CM & JDU chief Nitish Kumar at a public rally in Sasaram.

11:00 am: PM Narendra Modi reaches Biada Maidan in Sasaram to address an election rally. Chief Minister and JDU Chief Nitish Kumar addressing at present, says, "I welcome our Prime Minister and I thank people for turning up in huge numbers despite COVID19 pandemic."

10:30 am: Earlier it used to be - 'tum mujhe khoon do,main tumhe azadi dunga' & now it's - 'tum mujhe vote do,hum tumhe vaccine denge'.Only those who vote for BJP will get vaccine, it shows BJP's discriminatory nature: S Raut,Shiv Sena on BJP's promise of free COVID vaccine to all in Bihar

10:00 am: Congress leader Kapil Sibal hits out at the BJP over its promise of free Covid-19 vaccine to the people of Bihar and questions if residents of other states are not the people of India.

Free vaccine against COVID-19 for residents of Bihar

No vaccine in sight

But why for Bihar residents only ?

Election Commission should step in

9:55 am: Ahead of his rally, Rahul Gandhi hits out the BJP government and says whether it is coronavirus or unemployment, the whole country is troubled by false statistics.

9:50 am: PM should speak out today on Chirag Paswan, joblessness, migrants issue & COVID-19 deaths in Bihar. He will effectively turn all big lies into truth during his speech. He should now stop his 'Jumlebaazi': Jan Adhikar Party Chief Pappu Yadav

9:45 am: Today PM Modi will address his first rally for Bihar polls. He is very fond of Bihar. PM Modi's rallies will help NDA to successfully create a new wave in this election season: Union Minister Nityanand Rai

9:30 am: Purnea Airforce Statio doesn’t come under the jurisdiction of district administration. Permission for landing was neither required from administration nor any application was submitted for the same, hence no question of denying: Rahul Kumar, District Magistrate, Purnea.

9:20 am: Transit program(for Rahul Gandhi's rally in Purnia)was scheduled on 23 Oct at Purnea Airforce Station. Preparations started as per security protocol & ASL meeting was done. On 22nd, we were informed about the revised program which didn’t include Purnea as transit: Purnea DM, Bihar 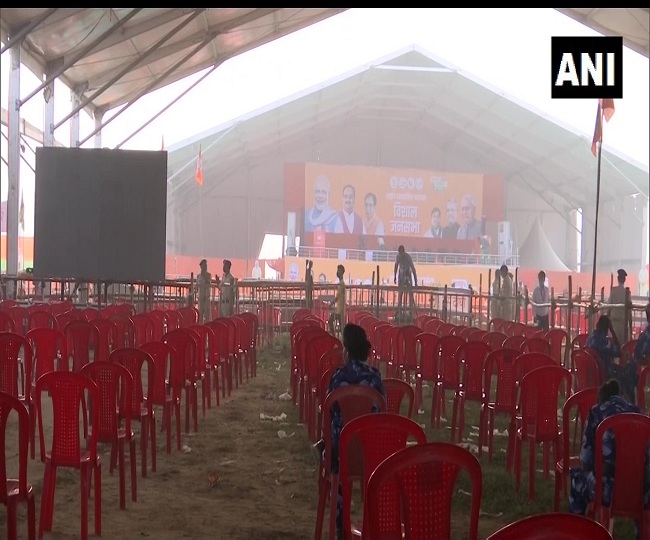 PLT IN SECOND = 0.003540502
Jagran English brings you all the latest and breaking news from India and around the world. Get live English news from India, World, Politics, Entertainment, Lifestyle, Business, Education, Sports, Technology, and much more. Follow english.jagran.com to stay updated with the latest English news.
Copyright © 2022 Jagran Prakashan Limited.