Assembly Elections 2022: Polling across 5 states to be held in 7 phases, counting on March 10 | Highlights

Assembly Elections 2022: Assembly elections in Uttar Pradesh, Uttarakhand, Punjab, Manipur and Goa will be held between February 10 and March 7 in seven phases. The counting of votes will be held on March 10.

New Delhi | Jagran Politics Desk: Assembly elections in Uttar Pradesh, Uttarakhand, Punjab, Manipur and Goa will be held between February 10 and March 7 in seven phases, the Election Commission announced on Saturday. The counting of votes will be held on March 10.

The Model Code of Conduct has come into effect in the five states with the announcement of elections.

Here are the highlights from the day:

17:56 hours: People of Punjab are eagerly looking forward to a strong, stable and development-oriented SAD-BSP government, committed to peace and communal harmony. Present rulers had reduced governance to a circus joke. People will heave a sigh of relief that it is over, says SAD president Sukhbir Singh Badal.

17:36 hours: BJP will be successful in forming in the government again with overwhelming majority when results for Uttar Pradesh Assembly elections are announced on March 10. There should be no doubt about it, says Uttar Pradesh Chief Minister Yogi Adityanath.

17:30 hours: We welcome the announcement of election dates for Uttarakhand. Congress always abides by the code of conduct and the guidelines set by the Election Commission, says Congress leader Harish Rawat.

16:07 hours: Polling across five states to be completed in seven phases, says CEC.

16:06 hours: Situation to be reviewed and fresh instructions to be issued later, says CEC.

16:02 hours: No roadshows, procession and public rallies will be allowed till Jan 15, says CEC

16:01 hours: All political parties have been urged to conduct rallies virtually, says CEC.

15:58 hours: All polling booths will be fully sanitised, says CEC.

15:55 hours: Our cVIGIL application should be used by voters to report any incident of violation of the Model Code of Conduct, distribution of money and freebies. Within 100 minutes of complaint, ECI officials will reach the place of offence, says CEC Sushil Chandra.

15:53 hours: Just In: Model Code of Conduct (MCC) comes into effect immediately from announcement of the schedules. Election Commission has made elaborate arrangements for ensuring the effective implementation of the MCC guidelines. Any violation of these guidelines will be strictly dealt with, says CEC Sushil Chandra.

15:52 hours: It is mandatory for political parties to upload on their website detailed information regarding individuals with pending criminal cases selected as poll candidates. They will also have to give a reason to select the candidate, says CEC Sushil Chandra.

15:52 hours: EVMs and VVPATs will be utilized in all the polling stations. Election Commission has already made arrangments to ensure an adequate number of EVMs and VVPATs for the smooth conduct of elections, says CEC Sushil Chandra.

15:47 hours: ECI has mandated that at least one polling station managed exclusively by women shall be set up in every Assembly constituency. Our officers have identified much more than that. There're 690 Assembly seats but we are setting up 1,620 such polling booths, says CEC Sushil Chandra.

15:43 hours: A total of 18.34 crore electors including service voters will take part in this election out of which 8.55 crore are women electors, says CEC Sushil Chandra.

15:36 hours: Had meetings with government, experts and all other parties to discuss COVID-19 situation in India, says EC.

15:33 hours: Impact of COVID-19 has made it difficult to conduct elections, says EC.

15:32 hours: I welcome you all to this press conference, says Election Commission. 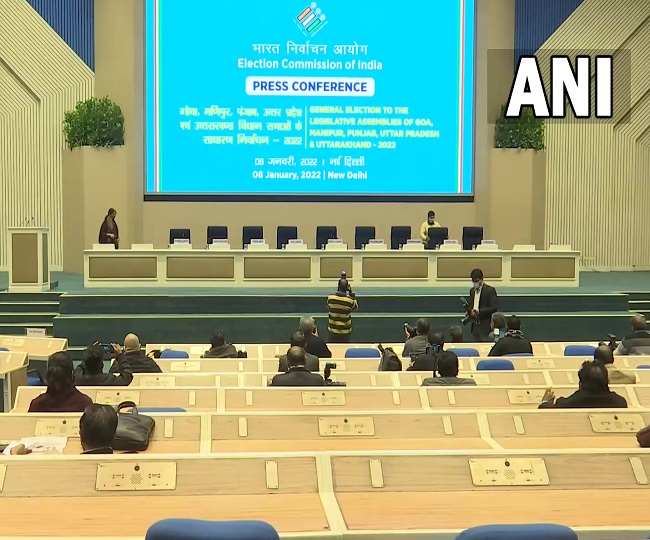 15:25 hours: The Election Commission team has arrived at the Vigyan Bhawan in New Delhi. 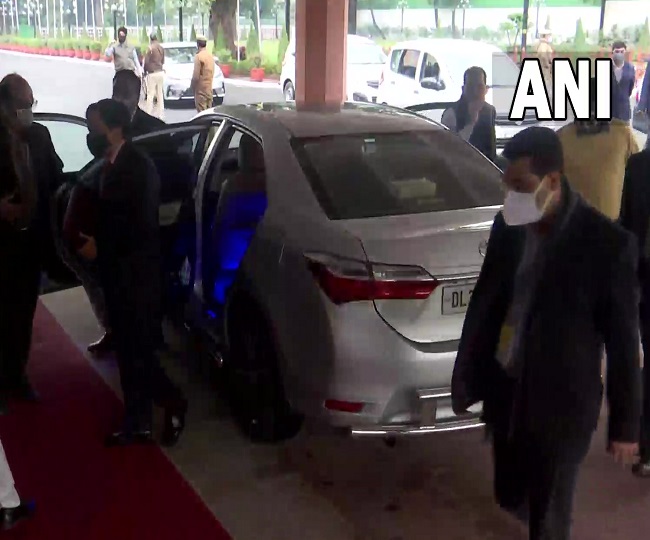 15:23 hours: Ahead of annoucement of poll schedule, the Punjab DGP has been replaced. Click here to read the full story.

14:40 hours: On the other hand, Manipur will have a two-phase elections while Uttarakhand and Goa will voting in just one phase, claim media reports.

14:30 hours: Meanwhile, reports suggest that Punjab will go for polling in two to three phases.

14:10 hours: Media reports suggest that the Uttar Pradesh assembly elections 2022 will be held in six to eight phases.

13:35 hours: Just In: Nishad Party will fight on 24 seats and we will soon release a list of candidates for the upcoming Uttar Pradesh Assembly elections, says Nishad Party Chief Sanjay Nishad.

13:28 hours: It should be noted that the term of the current Uttar Pradesh assembly is ending in May while those of the other four assemblies are ending on different dates in March.

12:33 hours: In another meeting last week, the EC had discussed the law and order situation in the five states with Union Home Secretary Ajay Kumar Bhalla.

12:21 hours: Sources, quoted by news agency PTI, said that the EC stressed to the health secretary the need to ensure complete vaccination for all eligible persons.

12:15 hours: During the meeting, the Centre had shared the data about weekly positivity rate, percentage of those who have received the first and the second COVID vaccine and the number of Omicron cases in the five states with the top poll body.

12:05 hours: Later, the EC held a meeting with Union health secretary, AIIMS director Randeep Guleria, ICMR's Balram Bhargava and other experts to review the situation in the country.

12:00 hours: However, all major political parties have urged the EC to not postpone the polls but ensure that all necessary COVID-19 protocols are followed.

11:55 hours: Considering the situation, the EC over the last few days has held crucial meetings with all major political parties to review the situation in India, especially in the five poll-bound state.

11:50 hours: It should be noted that calls have been across India to postpone the polls in wake of the rising COVID-19 cases.

11:45 hours: The Election Commission will address a press conference at 3.30 pm on Saturday to announce the poll schedule for assembly elections in five states - Uttar Pradesh, Punjab, Uttarakhand, Goa and Manipur.