Assembly Elections 2021: The TMC has cancelled the release of its election manifesto for the upcoming assembly polls in West Bengal.

Meanwhile, West Bengal Chief Minister and Trinamool Congress (TMC) supremo Mamata Banerjee held a roadshow on a wheelchair in Hazra on Sunday afternoon. This was Banerjee's first public rally after the Nandigram incident where she claimed that she was allegedly attacked by "four to five" men.

15:39 pm: In Assam, BJP will contest on 92 seats and on rest of the seats, our partner parties will contest. We are releasing the names of 17 candidates for the third phase of elections. Chandra Mohan Patowary will contest from Dharmapur seat: BJP National General Secretary Arun Singh

15:20 pm: In Kerala, BJP will be contesting 115 seats and the rest of 25 seats will be left for 4 parties. State BJP chief K Surendran will contest from two constituencies - from Manjeshwar in Kasaragod and Konni in Pathanamthitta: BJP National General Secretary Arun Singh

15:19 pm: In Tamil Nadu, BJP is contesting as NDA partner and we'll be contesting in 20 Assembly constituencies spread across all regions of the state. State president L Murugan will contest from Dharapuram. Senior leader H Raja will contest from Karaikudi: BJP National General Secretary Arun Singh

15:02 pm: Can Rahul, who has taken Badruddin Ajmal's support, protect Assam from infiltration? Can Assam be safe with Badruddin? Give us another 5 years, infiltration will be a thing of past in the state, says Amit Shah.

14:48 pm: In some days, it'll be decided who will run Assam for the next 5 years. On one hand, there's PM Modi, Sarbananda and Himanta's leadership and on the other hand, Rahul Gandhi and Badruddin Ajmal's leadership. Tell us who can develop Assam?, says Amit Shah.

14:28 pm: We will continue to fight boldly! I'm still in a lot of pain, but I feel the pain of my people even more. In this fight to protect our revered land, we have suffered a lot and will suffer more but we will NEVER bow down to COWARDICE!, says Mamata Banerjee.

14:16 pm: I want to congratulate the state government for building toilets in the houses, across the state. I have been told that all the districts of Assam are now open defecation free, says Defence Minister Rajnath Singh in Assam's Biswanath.

#WATCH: West Bengal CM Mamata Banerjee arrives at Gandhi Murti in Kolkata on a wheelchair. She will hold a roadshow to Hazra shortly. pic.twitter.com/v5ZD5KQtNn

13:25 pm: As a mark of respect and encouraged by my brothers and sisters of Nandigram, I am contesting West Bengal Elections 2021 as TMC candidate from this historic place. It is my great honour to be here and work along with members of Shaheed families against anti-Bengal forces, says Mamata Banerjee.

13:25 pm: On this day, in 2007, innocent villagers were killed in firing at Nandigram. Many bodies could not be found. It was a dark chapter in the history of the State. Heartfelt tribute to all those who lost their lives, says Mamata Banerjee.

In memory of those who lost their lives in Nandigram, we observe March 14 as Krishak Dibas every year and give away the Krishak Ratna awards. Farmers are our pride and our government is working for their all-round development, she added.

12:36 pm: West Bengal: Special stage being set up, ramps being installed at Gandhi Murti in Kolkata from where CM Mamata Banerjee will conduct a roadshow to Hazra on a wheelchair today. 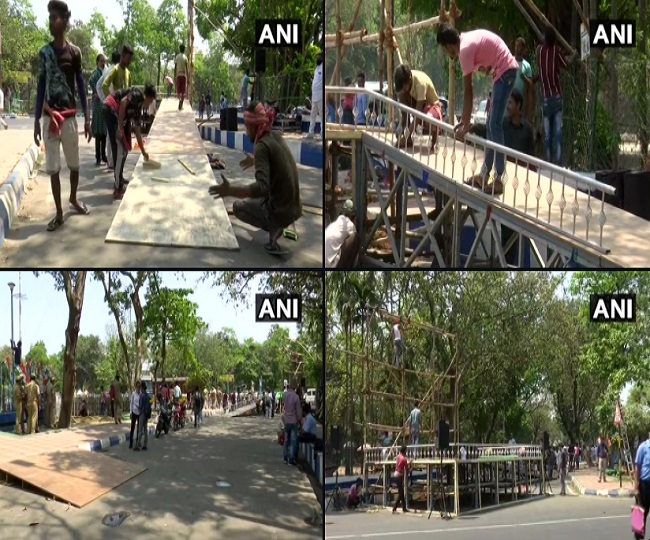 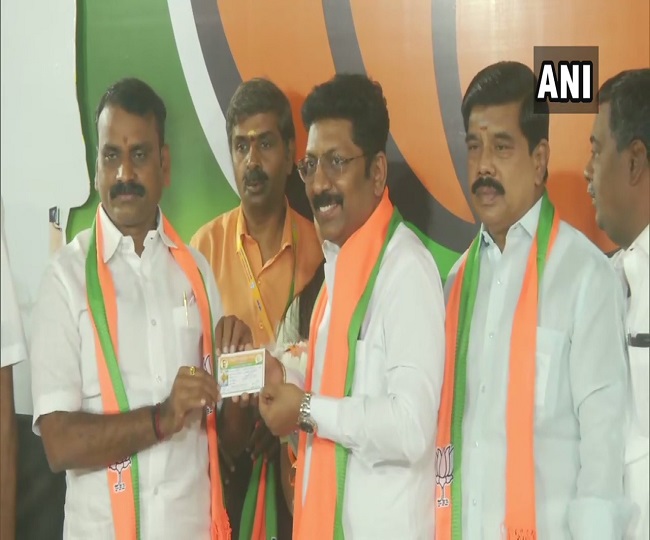 11:38 am: It's not only the Observers but even common people who think the same. People from every party or region, people from her own party, West Bengal police, all of them think that it is a drama. With this, Mamata Banerjee has stooped even lower before people, says MoS MHA G Kishan Reddy

10:45 am: The poll panel had earlier called West Bengal government's report on Nandigram incident 'sketchy' and asked the state Chief Secretary Alapan Bandyopadhyay to "elaborate it".

10:35 am: Media reports suggest that the Election Commission will take a call on the report submitted by the West Bengal government into the Nandigram incident on Sunday.

9:46 am: Also Read -- Mamata Ji a fighter, had 'offered to be exchanged' for Kandahar hostages, claims Yashwant Sinha

8:47 am: TMC cancels the release of its election manifesto for West Bengal Elections 2021, which was scheduled for today. Next date to be announced later, reports ANI.

8:25 am: Meanwhile, Defence Minister Rajnath Singh will start campaigning for the BJP in Assam today. He will address four rallies in Biswanath and Golaghat districts.

7:49 am: Media reports suggest that the TMC will also release its manifesto for Assembly Elections in West Bengal today.

7:28 am: Amit Shah will address multiple rallies in Assam's Margarita and Nazira today. The BJP has said that Shah will also hold a roadshow in West Bengal's Kharagpur today evening.

7:21 am: West Bengal Chief Minister Mamata Banerjee will conduct a roadshow on a wheelchair from Gandhi Murti to Hazra. She will address a public rally at Hazra this afternoon.