Assembly Elections: ﻿Rahul Gandhi to address 2 public rallies in Bengal on April 14 | As it happened

Assembly Elections 2021: The assembly elections in West Bengal have reached the halfway mark as the fourth phase of polling in the state ended on Saturday.

New Delhi | Jagran Politics Desk: Day after the killings of four people in Cooch Behar by Central Forces during the fourth phase of polling on Saturday, Union Home Minister Amit Shah said once BJP comes to power, political and poll-related violence will end in West Bengal. Earlier today, Shah held a roadshow in Shantipur in the Nadia district that witnessed a huge crowd on Sunday. Thousands of supporters carrying BJP flags participated in the roadshow.

Meanwhile, West Bengal Chief Minister Mamata Banerjee called the Prime Minister and Home Minister "incompetent" over the incident. She also said that the Election Commission has restricted the entry of politicians in the district for 72 hours as it seeks to "suppress facts".

16:55 pm: Earlier, Didi encouraged youngsters and women (in Sitalkuchi) to come forward and gherao CAPF. You said and left on your wheelchair. But because of you, 4 people died there. On the same morning, a BJP worker also died in the constituency, says Amit Shah.

16:50 pm: Didi is repeatedly saying Amit Shah must resign. Didi when people will ask me to resign then I will. But you must prepare as you will have to resign on May 2, says Amit Shah.

I have come here to make one request. Didi has ruled for 10 years. Would it look good to give her a small farewell? So you should give her a farewell by giving 200 seats to BJP, he added. 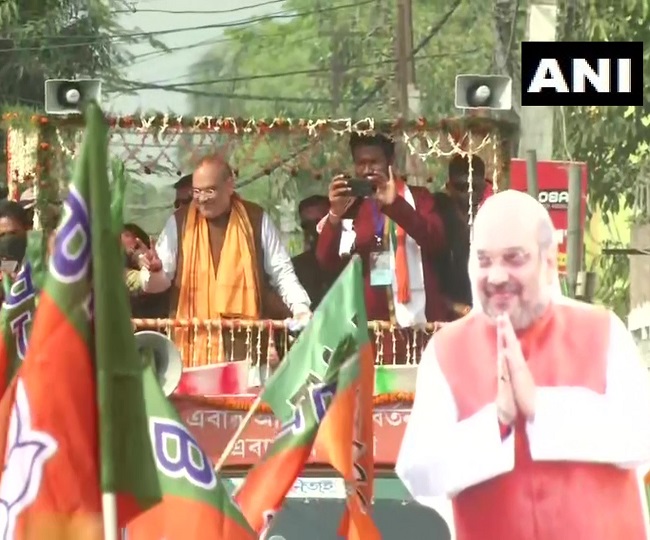 14:40 pm: Mamata Banerjee still has time to condole the fifth killing (Anand Burman) and apologise to the people of Bengal for her speech, says Amit Shah.

14:30 pm: Except for this one incident (Sitalkuchi), elections in West Bengal have been conducted peacefully so far. I promise that after BJP comes to power here political and poll-related violence will end in Bengal, says Amit Shah.

Mamata Banerjee condoled only four people. She didn’t shed a single tear for Anand Burman because he belonged to a Rajvanshi community. He wasn’t fit for her appeasement politics. This type of politics is not the culture of Bengal, he added.

13:56 pm: I am a Royal Bengal Tiger. They didn't let me go (to Cooch Behar). I talked to them (families of deceased in firing incident) over video call sitting in Siliguri, says Mamata Banerjee.

They (BJP-ruled Centre) know they have lost in 4 phases (of Assembly polls) so now they are using guns. We will take revenge for these bullets in form of ballots, she added.

13:27 pm: Amit Shah waves and shows victory sign to the crowd in Nadia. 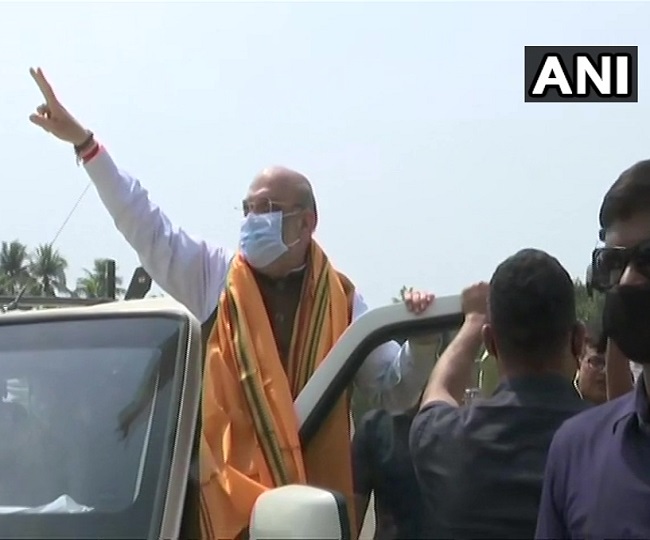 13:13 pm: Amit Shah holds a roadshow in Nadia district's Santipur. He will speak to media shortly. 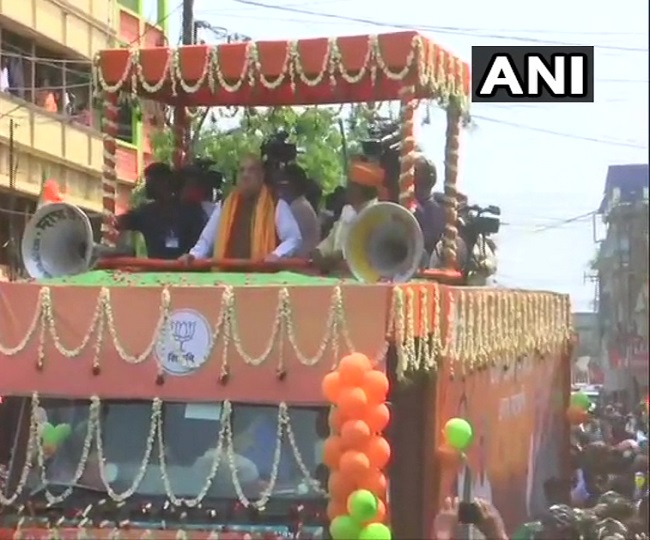 12:07 pm: Mamata Banerjee speaks to the families of people who died in Cooch Behar incident.

#WATCH | West Bengal Chief Minister Mamata Banerjee spoke to the families of people, who had died in a firing incident at Cooch Behar, over a video call during her press conference in Siliguri

"I will come to meet you on April 14," she told them pic.twitter.com/NIHbn0CCnz

11:23 am: It's incompetent government with incompetent Prime Minister and Home Minister. They're coming here daily to capture Bengal. You are welcome, nobody has stopped you but make people happy rather than threatening them. You get people killed by central forces and later issue them a clean chit, says Mamata Banerjee.

11:12 am: It is a genocide. They sprayed bullets. They could have shot on the leg or the lower body but every bullet hit them in the neck or chest area, says Mamata Banerjee.

10:34 am: Just In: A BJP delegation, led by Union Minister Mukhtar Abbas Naqvi, along with other leaders will meet Election Commission in Delhi today

9:52 am: Uttar Dinajpur Violence | The officials have said that they have suspended Circle Inspector along with 6 other police officials, who had escaped from West Bengal's Pantapara area for leaving SHO of Kishanganj Police Station Ashwini Kumar alone with the crowd.

9:40 am: Uttar Dinajpur Violence | In another incident of violence, Bihar Police officer Ashwini Kumar was beaten to death by a crowd in a village in Goalpokhar police station area of Uttar Dinajpur on Saturday.

"He had come for a raid in connection with a bike theft. Islampur SP with us. We'll raid and make arrests," said officials, quoted by news agency ANI. 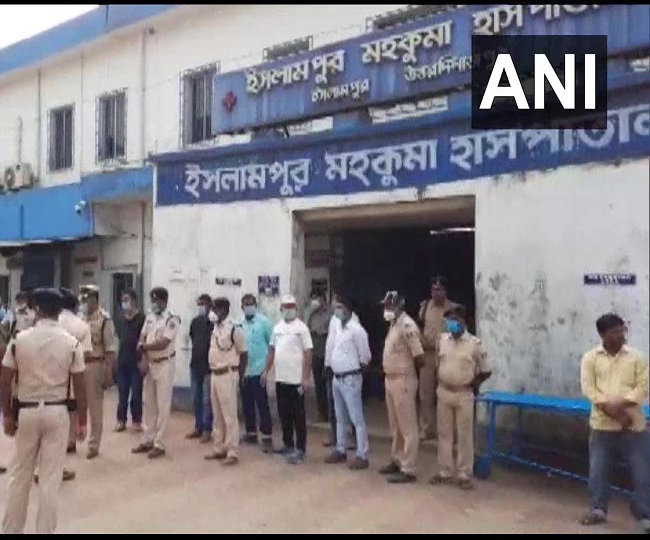 9:15 am: 71 more CAPF companies will be deployed in West Bengal for conduct of remaining four phases of polls, say official quoted by news agency PTI.

9:00 am: The BJP, on the other hand, has slammed Mamata Banerjee over Cooch Behar and said that she will have to resign after May 2.

Amit Shah is the home minister and hence the country is safe. Free and fair elections are being held for the first time. People creating chaos are being punished, said West Bengal BJP chief Dilip Ghosh in Kamarhati.

8:45 am: Meanwhile, the CISF said that the firing was done after a mob of around 150 people attacked the polling officials at the Sitalkuchi polling booth in Cooch Behar.

"Firstly, they beat up the Head of Home Guard and Asha worker who were present on the duty at the booth. CISF Booth Comdr tried to pacify the miscreants but the mob entered the polling booth and further beaten up the other polling staff on duty. Few miscreants tried to snatch the weapons of CISF personnel deployed there," it said.

8:35 am: Mamata Banerjee has also ordered a CID probe into the incident.

8:10 am: During the fourth phase of polling, violence erupted in Bengal's Cooch Behar as four people lost their lives after the CISF opened fire at a mob of 150.

8:05 am: This comes a day after the fourth phase of polling ended in West Bengal with 76.16 per cent voter turnout.