New Delhi | Jagran News Desk: Prime Minister Narendra Modi, today addressed a public rally in Kanthi, West Bengal. During his address, PM Modi said that this is a very crucial time for first-time voters and youth aged around 25 in Bengal. They have the responsibility to build the future of Bengal and thus, 'Ashol Poriborton' is the need of the hour, the PM said.

Meanwhile, the BJP on Tuesday brought back former chief economic advisor to the government Ashok Lahiri back in the poll fray by fielding him from the Balurghat seat, even as it announced a list of 13 candidates, including a former senior army officer, for the final four phases of West Bengal assembly polls. Lahiri was earlier pulled out of the Alipurduar seat in north Bengal after local party workers held protests against his candidature. The BJP replaced him with Suman Kanjilal, general secretary of its Alipurduar district committee.

Here are the Highlights of Assembly Elections 2021:

5:20 pm: Today is the 186th raising day of Assam Rifles. It has a proud history of protecting this country. Today I salute Assam Rifles and express my gratitude to them, from this land of Assam: PM Modi in Sipajhar

4;00 pm: Congress can do anything for votes Here it's joining hands with the Left while in Kerala, it's abusing them. This is not 'Mahajot', it's a 'Mahajhoot' which neither has a representative nor policy. Such an alliance can only guarantee infiltration &corruption: PM Modi in Lakhmipur

3;50 pm; Congress couldn't even increase tea workers' wages to Rs 100. While NDA in 5 years increased their wages by 2 times. The same Congress is now spreading lies. Soon after we form govt, decisions will be implemented to make tea workers' lives better: PM Modi in Lakhmipur

3:40 pm: Today there's development in Assam, it's free from infiltrators. Congress has joined hands with people (AIUDF) whose aim is to destroy Assam's identity. Do you want Assam's traditions to be ruined? Congress taking help from a group that promotes infiltrators: PM Modi in Lakhmipur

3:30 pm: BJP believes that governments should not intervene in issues related to temples. It should be left on devotees. Communist party cadres have mistreated Sabrimala bhakts, dressed in police attire: Union Home Minister & BJP leader Amit Shah in Chathannoor.

3:10 pm: This is 'Didi-Bhaipo's khela', they want to scare away the voters ahead of the first phase of polling for West Bengal elections. We are committed towards making a 'Sonar Bangla': BJP leader Kailash Vijayvargiya

3:00 pm: There are was a time when Kerala was considered as the role model of tourism & development. It was known as the most educated and peace-loving state. LDF and UDF governments have made Kerala a hub of corruption: Union Home Minister & BJP leader Amit Shah in Chathannoor, Kerala.

2;45 pm; Mahajot will form the govt, but CM will be from Congress. We're contesting the maximum number of seats. There'll not be a Deputy CM also. This alliance was formed to oppose CAA & to take on the Centre to nullify it: Congress' Gaurav Gogoi on alliance's CM face in Assam

2:30 pm: We had launched anti-CAA protest by asking people to donate 'gamosa', while BJP is deceiving people. In Bengal, their manifesto mentions CAA, but in Assam, it has no mention. CAA is a central law, why is BJP using CAA in 1 state&excluding in another: Congress' Gaurav Gogoi on CAA

2:10 pm: They (BJP) are bringing goons from outside. We don't call people who hail from Bengal 'bohiragoto' (outsider)...Goons from Uttar Pradesh donning saffron clothes & chewing Pan Bahar are being sent here, they are destroying our culture: West Bengal CM in Bishnupur

#WATCH | They (BJP) are bringing goons from outside. We don't call people who hail from Bengal 'bohiragoto' (outsider)...Goons from Uttar Pradesh donning saffron clothes & chewing Pan Bahar are being sent here, they are destroying our culture: West Bengal CM in Bishnupur pic.twitter.com/G8N9HrSn9D

1:55 pm; Did accused woman make foreign trips on state funds & Principal Secy's permission? Why did she come to CM residence regularly? Did you build pressure on Customs office after gold was seized from airport? Was attack on ED/Customs officers probed properly?: HM Amit Shah

1:50 pm: I have 7 questions for Vijayan ji - Did prime accused of gold scam work in your office or not? Did your govt give this accused Rs 3 lakh/month? Did your Principal Secretary make phone calls to help these accused or not?: Union Home Minister & BJP leader Amit Shah, in Kerala

1;45 pm; There have been two floods in Kerala, and over 500 people lost their lives. Left govt calls our army very late, only for their own political mileage. They do not care about the lives of the people of Kerala: Union Home Minister & BJP leader Amit Shah, in Kanjirappally, Kerala

1;40 pm; LDF and UDF governments have made Kerala a hub of corruption. When UDF comes to power, there is a solar light scam and during LDF's tenure, there are donor & gold scams: Union Home Minister & BJP leader Amit Shah, in Kanjirappally

1;25 pm; CM Palaniswami has begun blabbering in campaigns. It's all there on social media how he became CM by crawling. He says he isn't a snake or lizard that he would crawl, I say that he is more poisonous than a snake & lizard: DMK president MK Stalin in Salem

12:30 pm: Our AIADMK candidates are ISI certified but their candidates (DMK) are duplicates. Voters should not believe in duplicity: Tamil Nadu Chief Minister Edappadi K. Palaniswami in Karur

12:20 pm: Tamil Nadu CM & AIADMK's Edappadi K Palaniswami campaigns for BJP candidate from Aravakurichi, Annamalai "Stalin says AIADMK is BJP's slave. I want to say to him that you (Stalin) may be a slave but not us. Our alliance with BJP is strong," CM says

12;10 pm: The Bengal that has bound India in the spirit of Vande Mataram, here Mamata Didi speaks of 'bohiragoto' (outsider). We all are children of this land, no Indian is an outsider in this land: PM Narendra Modi in Contai.

11;58 am; Congress is a confused party. In Kerala, they are fighting against the Communists and in Bengal fighting along with them. Congress party and its leadership is confused: Union Home Minister and BJP leader Amit Shah, in Kerala

11:55 am: The people of Kerala are fed up of LDF and UDF. The people here are seeing Bharatiya Janata Party as an alternative. I am sure that we will perform well in the upcoming Kerala Assembly elections: Union Home Minister and BJP leader Amit Shah, in Kerala

11:50 am: Why are Amphan-struck people still forced to live under shattered roofs? Didi is nowhere to be seen when there is a need but when elections draw near, she says "Sarkar Duare-Duare". This is their (TMC) khela. Even the children in Bengal have understood it: PM Modi in West Bengal

11:45 am; Didi hasn't been able to answer those who were first destroyed by Amphan & later by 'tolabaaz' of TMC. The relief sent to Bengal by Centre got stuck in the 'Bhaipo window'. Didi, Bengal wants to know who looted the relief for Amphan?: PM Modi in Contai

11:40 am: Our mothers and sisters have forward in huge numbers to punish TMC in this election: PM Narendra Modi in Contai.

11:35 am: Didi, even the children of West Bengal have understood your 'khela'. Thus on May 2, West Bengal will show door to Didi: PM Narendra Modi in Contai.

11:30 am: "2 May, Didi jacche, ashol poriborton asche", can be heard across Bengal," says PM Narendra Modi in Contai.

11:20 am: This is a very crucial time for first time voters and youth aged around 25 in Bengal. They have the responsibility to build the future of Bengal and thus, 'Ashol Poriborton' is the need of the hour, PM Modi in Kanthi, West Bengal. 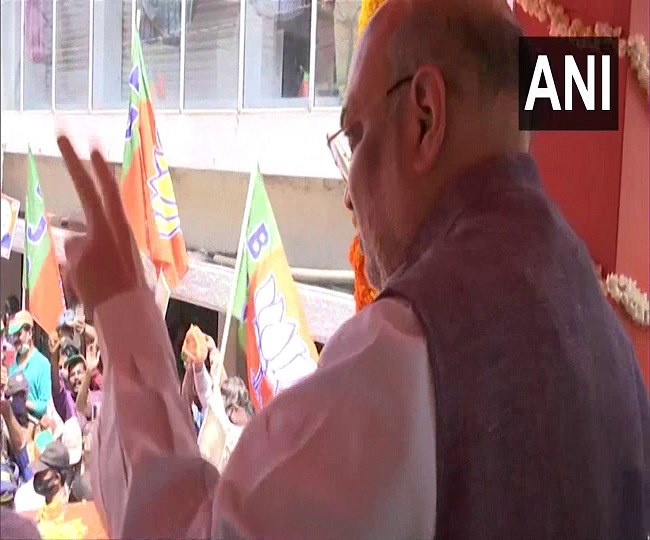 10:50 am: Coochbehar: A Bharatiya Janata Party (BJP) Mandal President was found dead near party office in Dinhata, earlier today. "It's a pre-planned murder. They (TMC) want us (BJP workers) to just sit at home out of fear but we will continue our fight," says a BJP worker.

10:15 am: Coimbatore: A yoga instructor walked upside down yesterday while pulling a car in RS Puram to campaign for AIADMK candidate & state minister SP Velumani ahead of #TamilNaduElections2021. "I want to create awareness about yoga & its health benefits while campaigning," he said

10:00 am: Tamil Nadu: Election Flying Squad seized Rs 1 crore from a vehicle during checking at Pettavaithalai bridge in Trichy, yesterday. The vehicle had an AIADMK flag.