New Delhi | Jagran Politics Desk: Prime Minister Narendra Modi on Sunday made another scathing attack at the Congress in poll-bound Assam and accused the grand old party of giving "false guarantees" when it was in power at the centre and also in the state. He also urged the voters to vote for the BJP in the upcoming polls and said Assam will witness a 'double engine' NDA government for the second time.

Meanwhile, veteran TMC Lok Sabha MP Sisir Adhikari, the father of BJP leader Suvendu Adhikari, joined the BJP on Sunday at a public rally of Union Home Minister Amit Shah in East Midnapore's Egra. "It is a fight for my self-respect. I have always been a fighter and will continue to do so in the time to come as well. We came from the footpath. I will only do what Suvendu will ask. I will fight to protect the honour of East Midnapore," he said.

18:15 pm: We have decided to call our manifesto a 'Sankalp Patra'. It is not just a manifesto but a resolution letter for West Bengal by the country's largest party, says Amit Shah. 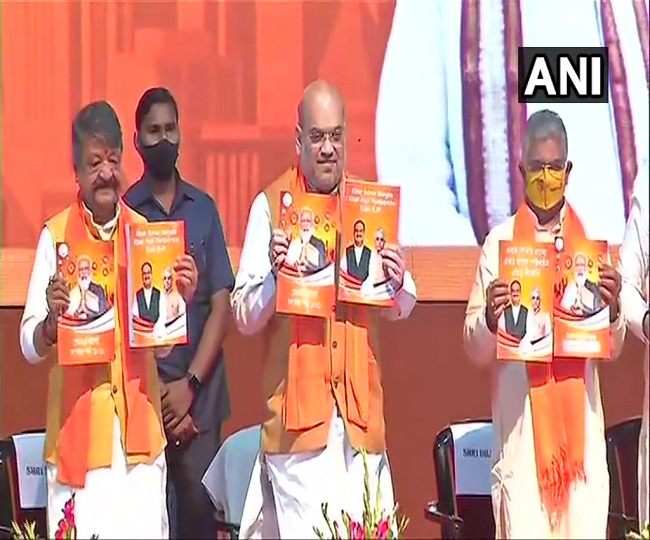 17:35 pm: BJP party means Bharatiya Joghonno (bad) Party. I was Lok Sabha MP seven times and I have seen many prime ministers. But I have never seen such a ruthless, cruel PM. BJP is a party of monsters, demons, Ravana, Duryodhana, Dushasana, unrest and terror: West Bengal CM Mamata Banerjee

16:30 pm: The more I question Didi, the angrier she gets. Now she says that she doesn't like my face. Didi, in democracy, it is the public service and not the face which is put to test: PM Modi

16:30 pm: Didi, if you want you can put your foot on my head and kick me. But Didi, I will not let you kick Bengal's development and dreams of its people: PM Modi

16:20 pm: I call upon the first time voters to vote and make the dream of Sonar Bangla come true. Left, Congress and TMC have wasted a lot of time of your previous generations. I can't let your futures be ruined: PM Modi

16:18 pm: Didi's people are making graffiti in the streets of Bengal wherein she is hitting my head with her foot and playing football. Didi, why are you insulting Bengal's culture and traditions?: PM Modi

16:13 pm: Game of corruption will not continue in Bengal: PM Modi

16:12 pm: Didi, you have only made hollow announcements in the last 10 years, where is the work you claim to have done? You keep saying 'Khela Hobe' while people of West Bengal have decided 'Khela Shesh Hobe' (the game will end): PM Modi

16:07 pm: I think that you people have decided to compete with Brigade Ground. As far as I can see, I can only see people...: PM Modi 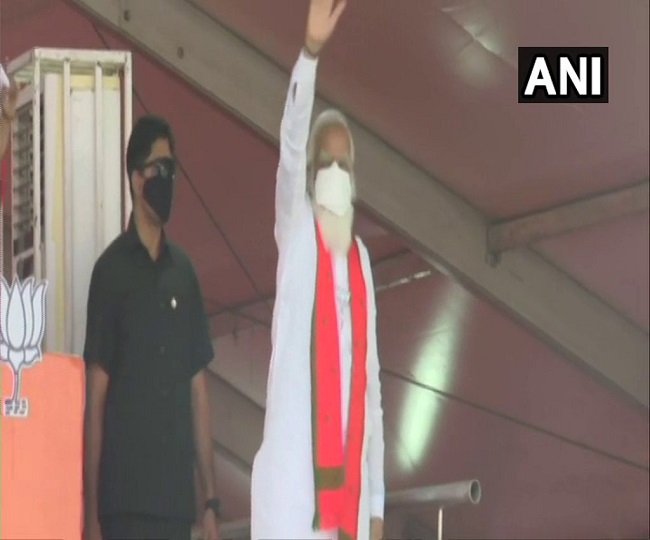 14:49 pm: BJP Parliamentary Party meeting scheduled to be held in the Parliament on March 23.

14:24 pm: Just In: BJP President JP Nadda to release the party's manifesto for Assam Assembly elections on March 23 in Guwahati

13:37 pm: Has the PM ever visited a tea garden, met women workers there? Doesn't the PM feel their pain as his promise of giving Rs 350 per day as a daily wage to tea garden workers has not been fulfilled yet?, says Congress' Priyanka Gandhi Vadra in Assam's Jorhat.

We are giving a solid fight, we are very confident. Our effort is to talk about development, needs of the people of Assam and preserving and strengthing their culture and identity, she added.

12:52 pm: Our 130 cadres were killed. Goons of TMC shouldn't think that they will be spared. We will take action when our government comes to power in West Bengal on May 2: Amit Shah

12:50 pm: Didi gave the slogan of 'Maa, maati, manush' but did change come? Can she give you freedom from infiltrators? We will make Bengal free of infiltrators in five years: Amit Shah

12:27 pm: The NDA govt has put the rhino hunters in jails. We're working on both safety of animals as well as facilities for the people of Assam: PM Modi

12:27 pm: In the last 5 years, Assam has witnessed a growth in forest cover. It increases the opportunities for tourism and economic activities. We want India to be included in one of the leading nations in natural, spiritual, cultural and heritage tourisms, and Assam has all of this: PM Modi

12:26 pm: When Congress was in power at the Centre and in Assam, there was double negligence and double corruption. You have to remember that Congress means instability, corruption. They have no vision or intention to do any good: PM Modi

11:54 am: PM Modi to address a public rally in Assam's Bokakhat shortly. 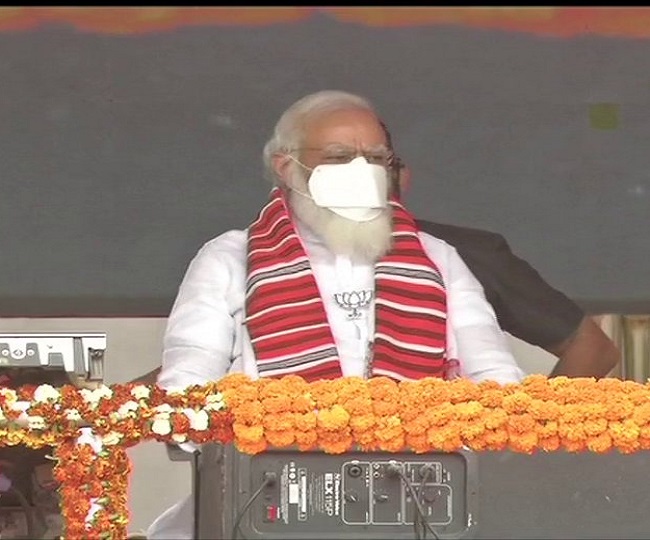 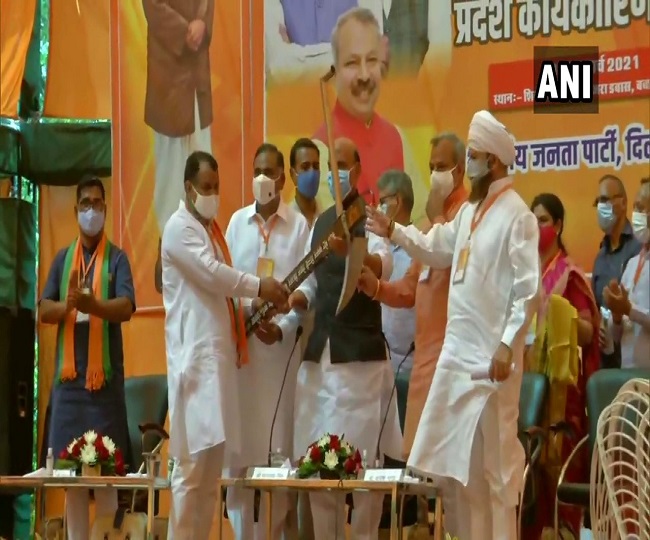 10:47 am: The BJP in a statement has said that Amit Shah will address the public meeting in West Bengal at around 12.30 pm today.

10:15 am: Remote voting may see the light of the day by 2024 Lok Sabha elections. A team of technocrats and experts from IIT, Chennai and some other IITs are working on it in full swing. We hope to see the first pilot project in next 2-3 months, says Chief Election Commissioner Sunil Arora

* The nomination of N Haridas (BJP President of Kannur) from Thalassery constituency was rejected as the nomination paper didn't have the signature of BJP national president.

* The three candidates have approached the Kerala High Court today. The court will hold a special sitting later today to hear the petitions.

8:57 am: Media reports suggest that PM Modi will address a rally at around 1 pm today at the Tilabedya Maidan in Bankura.

8:15 am: According to a report by ANI, Amit Shah will release the BJP's manifesto for West Bengal around 5.30 pm today.

8:00 am: Notably, Sisir Adhikari had earlier said that he is ready to join the BJP if his son, Suvendu Adhikari asks him to.

7:58 am: News agency ANI has reported that Suvendu Adhikari's father Sisir Adhikari and his brother Dibyendu Adhikari who are TMC MPs will remain present at Amit Shah's election rally in Egra today.

7:50 am: Shah will also address a rally at the Pallighai Scholl ground in the Purba Medinipur district before releasing the BJP's poll manifesto.