Assembly Polls: 'Bengal will have double-engine govt,' says PM Modi | As it happened

4:10 pm: There might be people who do not want to vote for BJP, but no one who is seen talking bad about BJP & BJP govt across Assam. Both in phases 1 & 2, BJP is leading. I believe, BJP will do good in phase 3 also: Union Minister & BJP leader Narendra Singh Tomar

4:00 pm: Congress is not in good condition. Rahul Gandhi has surrendered himself to Badruddin Ajmal & has given Congress to him as mortgage. Congress will face its consequences in this poll. Alliance with Ajmal shows Congress' character: Union Minister & BJP leader Narendra Singh Tomar

3:50 pm: Govt that will be formed on May 2 will not only be a double engine govt, but it will also be govt that will give double benefit, direct benefit. Decision to implement PM Kisan Samman Nidhi will be taken at first Cabinet meeting. I'll attend the CM's swearing-in ceremony: PM Modi

3:40 pm: A major reason for Didi's bewilderment is her report card of 10 years. Old industries have been shut down. Possibilities of new industries, new investment, new business & employment have also been closed down: PM Modi in Hooghly

3:15 pm: BJP wants to divide Bengal. Do you know about 'Bang* bhang' movement? The same is happening these days. These people want to end Bengal, its language, and its culture: West Bengal CM & TMC chief Mamata Banerjee

3:00 pm: I request to all the minority brothers and sisters not to allow their vote division: West Bengal CM & TMC chief Mamata Banerjee in North 24 Parganas

2:45 pm: In Nandigram, we have seen a glimpse of what is going to happen on May 2 (when results of the Assembly elections will be declared: PM Narendra Modi in Arambag, Hooghly

2:30 pm; 2 years ago, when TMC tried banning Durga Puja here, Kolkata High Court had called it out sayng if Durga Puja can be celebrated in UP, then why not here? Now, Didi's govt is opposing 'Lord Ram' also. She says,"I hate the word Ram": BJP leader & UP CM Yogi Adityanath in Howrah, WB

2:20 pm: PM, BJP and AIADMK understand the views of Dalits. It was the BJP that made the son of a Dalit, the President of the country. Party's state chief is also a Dalit: Union Home Minister and BJP leader Amit Shah in Tirunelveli

2:10 pm: PM Modi thinks about farmers, unemployed youth& fishermen of Tamil Nadu. Stalin thinks about making his son Udhayanidhi Stalin, CM. People of Tamil Nadu have to decide if they want to go with those who think about the state or those who make their son, CM: HM-BJP leader Amit Shah

2:00 pm: Tamil Nadu Elections is a very important poll for the future of the state. These elections will decide if Tamil Nadu will walk on the path of dynasty or on the path of Makkal Thilagam MG Ramachandran: Union Home Minister and BJP leader Amit Shah in Tirunelveli

12:25 pm: Bengal is land of nation's cultural nationalism but TMC goons have made this land of hooliganism & anarchy. Congress, TMC & Left have changed the atmosphere & made it a victim of appeasement. Trends show that BJP will form govt with majority: UP CM & BJP leader in Uluberia Purba

12:10 pm: We work for everyone without discrimination but some people divide country for vote bank, which is unfortunately called secularism. But if we work for everyone, it's called communal. Games of secularism, communalism have caused great damage to country: PM Modi in Tamulpur, Assam

12:00 pm: The 'Mahajhooth' of 'Mahajot' (grand alliance) has been disclosed. On the basis of my political experience, & audience love, I can say that people have decided to form NDA govt in Assam. They can't bear those who insult Assam's identity and propagate violence: PM Modi in Tamulpur

11:45 am: Assam: Prime Minister Narendra Modi arrives at Tamulpur in Baksa district where he will address a public rally shortly.

11:30 am: We have won Nandigram. There is no other constituency, it's all BJP's mind games: TMC leader Derek O'Brien

11:25 am: Last night, Modi-Shah, had a review meeting over Bengal. They know that we're ahead of them. In 2019 Lok Sabha polls, we were 3% ahead of BJP & this time it's increased to 6%. 'Tourist Gang', despite big talks, are behind, that's why the mind games: TMC leader Derek O'Brien

11:10 am: State's development is possible only if we defeat dynastic & corrupt DMK-Congress. Only the development journey started under PM's leadership can make Tamil Nadu of MGR & Jayalalithaa's dreams. CM-Dy CM did good work. I appeal to people to make double engine govt: HM & BJP leader

10:55 am: Union Home Minister and BJP leader Amit Shah holds a roadshow in Thousand Lights assembly constituency as he campaigns for the party's candidate Khushbu Sundar. 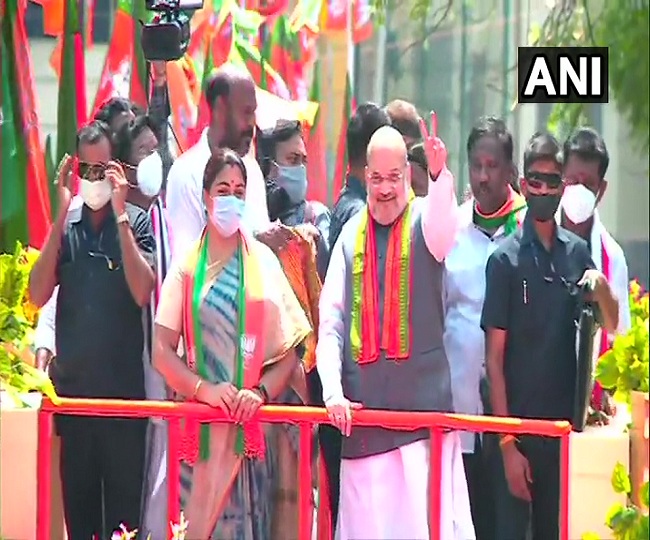 10:40 am: Uttar Pradesh CM and BJP leader Yogi Adityanath holds a roadshow in Uluberia ahead of the third phase of #WestBengalPolls, scheduled on April 6th. 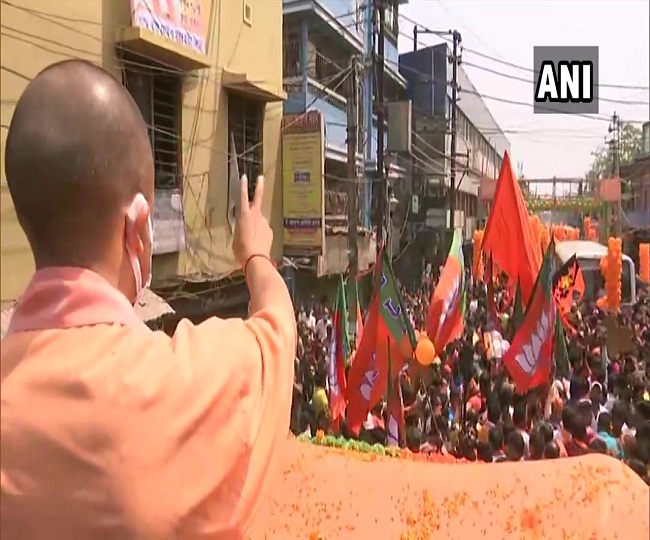 9:45 am: EC debarring Himanta B Sarma from campaigning for 48 hrs prove that BJP has lost polls & is resorting to tactics. We urge EC to debar Narendra Modi, Amit Shah, Sarbananda Sonowal & JP Nadda too who were shown in ads in Assam's newspapers, for free&fair polls: R Surjewala,Congress

9:30 am: That is her (Mamata Banerjee) strategy, she will know. But we have info that she is looking for it (another constituency). Her people told me this. She will know it but it is certain that she is losing in Nandigram: BJP chief JP Nadda to ANI in Guwahati, Assam

9:20 am: Assam has made up its mind to support BJP-NDA. In phase 1 & 2, people made a one-sided decision. Their decision for phase 3 also seems clear. I see huge crowd in my rallies, entire Assam has decided to vote for BJP-NDA. We'll form govt here: BJP chief JP Nadda to ANI, in Guwahati

9:15 am: We took the responsibility of making people who were holding weapons, a part of society. 2500-3000 people have surrendered, more than 4000 assault rifles have also been surrendered: BJP chief JP Nadda to ANI, in Guwahati, Assam

9:00 am: Bodo agitation was going on for 50 yrs. Thousands were killed. But no one paid heed to them. It was PM Modi's political will & HM Amit Shah's strategy that resolved the issue,CM implemented it in letter & spirit. We accommodated people's aspirations: BJP chief to ANI, in Guwahati

8:45 am: In West Bengal, we're forming govt & the results will be astounding. People of Bengal are eager to oust Mamata govt lock, stock, and barrel. In the first 2 phases, it is clear that TMC is gone and BJP is coming here. BJP's victory is certain: BJP chief JP Nadda in Guwahati, Assam

8:30 am: Rahul Gandhi has limited knowledge of Assam's culture. He (Badruddin Ajmal) threw away Gamosa. So is he Assam's identity or Srimanta Sankardev, Gopinath Bardoloi or Bhupen Hazarika Assam's identity? People doing opportunism politics are going with Badruddin: BJP chief in Guwahati

8:20 am: Congress denies having alliance with us but we don't think that. We want Sanjukta Morcha to form govt & Congress workers to do better as they're struggling too. If their leadership thinks differently, what can we do?: Abbas Siddiqui, Indian Secular Front

8:00 am: Kerala Chief Minister Pinarayi Vijayan campaigned in Kannur yesterday, ahead of single-phase Assembly polls in the state on April 6