New Delhi | Jagran News Desk: The second phase of polling in West Bengal and Assam concluded on Thursday with Bengal recording a voter turnout of 80.43 per cent, while 74.69 per cent voter turnout was recorded in Assam, according to the Election Commission. The third phase of polling will take place on April 6 in West Bengal, Tamil Nadu, Kerala and Puducherry. Prime Minister Narendra Modi will be campaigning in Madurai and Kanyakumari in Tamil Nadu today for the BJP and its alliance partner AIADMK.

PM Modi will also address a rally in Kerala's Thiruvananthapuram and Pathanamthitta for April 6 elections in the state. Meanwhile, uNION Home Minister Amit Shah will be in West Bengal, addressing public meetings at the Barakaimari Ground in Cooch Behar’s Sitakuchi and at the Subhashni Tea Garden Ground in Alipurduar. He will also hold a roadshow in South 24 Parganas from Fulltulla to Paddapukur in Baruipur Paschim.

Here are the Highlights from Assembly Elections 2021:

4;30 pm; Do you know why I went to a booth in Nandigram yesterday and sat there? All goons who had come from outside gathered there with guns. They were all speaking in some other language. BJP's people are goons: West Bengal CM Mamata Banerjee in Falakata

3;40 pm; BJP files complaint with EC demanding disqualification of Udhayanidhi Stalin's candidature in #TamilNaduElections over his statement on ex-union ministers late Sushma Swaraj & Arun Jaitley. Demands that he be delisted from list of DMK star campaigners & debarred from campaigning.

3;15 pm; They (LDF & UDF) promote dynasty politics, there is a craze for dynasty rule in both alliances, everything else is sidelined...The case of a top LDF leader's son is well known, I don't want to elaborate further: PM Modi in Pathanamthitta, Kerala

3;10 pm; People are seeing that BJP stands for bringing educated people into politics. The active presence of 'Metroman' E. Sreedharan speaks of that. He has contributed so much and now, he has chosen BJP as a means to serve society: PM Modi in Pathanamthitta

3;00 pm; There're times when people speak in one voice against tyrannical forces, that convey a special message to those in power. I am seeing a similar spirit in Kerala today... The people are seeing the development agenda of BJP, they relate with our policies: PM Modi in Pathanamthitta

2:45 pm: CAPF, under instructions of the Home Minister, has acted in a complete departure from its duty to act impartially, by being a mute spectator to continual violence perpetrated by BJP, perpetrating violence & intimidating electors voting for TMC & inducing voters to vote for BJP: TMC

1;20 pm; Those who are corrupt, & killed BJP workers, will be jailed after May 2. Be it coal mafia, sand mafia, water tanker mafia, or the ones involved in cow slaughtering. We'll form an SIT to probe them: Home Minister & BJP leader Amit Shah in Alipurduar, West Bengal

1;10 pm; Didi has lost Nandigram. The scenes that you witnessed yesterday tell that she is losing in Nandigram: Home Minister and BJP leader Amit shah in Alipurduar, West Bengal

12:50 pm: DMK & Congress will neither guarantee safety nor dignity. DMK tried to make peace-loving Madurai, into mafia because of complications in DMK's first family. They've not understood the ethos of Madurai, no wonder, leaders keep insulting women again and again: PM Modi in Madurai

12:45 pm: In the 2016 Tamil Nadu Congress manifesto, there was a call for ban on Jallikattu. Congress &DMK should be ashamed of themselves. People sought a solution & wanted Jallikatu to continue. Our govt then cleared ordinance by AIADMK, which allowed it to take place: PM Modi in Madurai

12;40 pm; This Stalin has faced MISA, emergency. They think they can scare us with the raids, this may happen with AIADMK but this will not happen with DMK: DMK chief MK Stalin in Perambalur

12;35 pm; Today morning I came to Trichy from Chennai. I got news of a raid going on at my daughter's house in Chennai. Modi govt is saving AIADMK govt now...I want to tell Modi that this is DMK, don't forget that, I'm son of Kalaignar. I'll not be scared with this: DMK chief in Perambalur

12;30 pm; Presiding Officer was issued show-cause notice for violation of transport protocol. PO & 3 other officials placed under suspension. Although EVM's seals were found intact it has been decided to do a re-poll at No 149- Indira MV School of LAC 1 Ratabari(SC): EC on Assam EVM issue

12;25 pm; People of this region have a strong mind and big heart, years ago people from Saurashtra in my home state Gujarat, came here. The way Madurai has accepted them is a perfect example of 'Ek Bharat, Shreshtha Bharat': PM Modi in Madurai, Tamil Nadu

12;15 pm; Your development will be our topmost priority if we form govt. We'll give Rs 2000 crores to the North Bengal development board for your development. There'll also be a battalion of Rajbanshi youth, to pay tribute to Narayani Sena: Home Min & BJP leader Amit Shah in Cooch Behar

12;10 pm; 4 EC officials suspended over Assam EVM issue: EC Sources Last night a polled EVM was being taken in Patharkandi, Assam when crowd intercepted it as car didn't belong to EC. As per sources, EC car broke down&officials took lift in a car later identified to be of a BJP candidate.

12:00 pm: This is a criminal act and we demand immediate disqualification of the candidate. This is clear that the BJP is losing in Assam that is why it is using illegal means to win the elections, which is unacceptable: Congress leader Sushmita Dev

11:00 am: West Bengal: Actor & BJP leader Mithun Chakraborty holds a roadshow in Pursurah of Hooghly district for party's candidate Biman Ghosh. He says, "There was no 'parivartan' earlier, it was a lie. There will be a change now, there will be no riots or violence. This is BJP's motto." 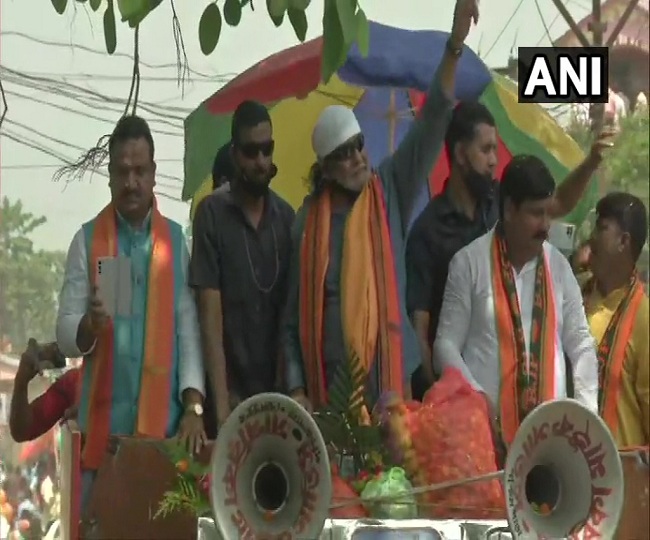 10:30 am: Sources inform that an FIR has been lodged on unknown persons who attacked the car carrying the polled EVM. Further investigations are on about the sequence of events, the EVM was not tampered with during the crowd attack & is in the custody of the administration, say Sources.

10:15 am: Last night a polled EVM machine was being taken in Patharkandi Vidhan Sabha, Assam when a crowd intercepted it as car didn't belong to EC. As per sources, EC car had broken down & officials took a lift in a passing car that was later identified as belonging to a BJP candidate.

10:00 am: West Bengal: CM Mamata Banerjee leaves from Nandigram for Kolkata airport. Nandigram went to the polls yesterday in the second phase of #WestBengalPolls. The CM and TMC leader will hold three public rallies in Alipurduar and Cooch Behar today. 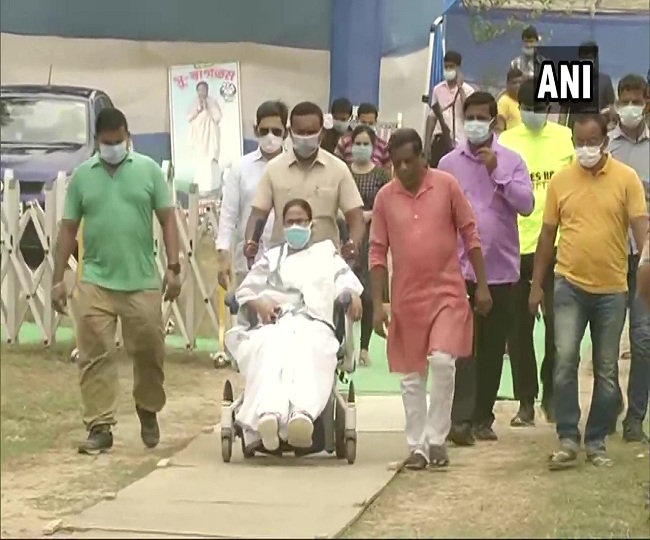 9:45 am: TMC's Dibyendu Adhikari writes to East Midnapore DM over Nandigram. His letter reads, "Considering present political situation in the area, I personally apprehend that existing communal harmony may be blatantly disrupted...I request you to take precautionary measures in advance."

9:30 am: As the campaigning for the April 6 assembly polls reaches the final phase, Prime Minister Narendra Modi will be addressing two election rallies in Kerala on Friday -- at Konni and Thiruvananthapuram.

9:15 am: A delegation of Trinamool Congress (TMC) will approach the Election Commission today at 1:30 pm.

8:33 am: As the campaigning for the April 6 assembly polls reaches the final phase, Prime Minister Narendra Modi will be addressing two election rallies in Kerala today--at Konni and Thiruvananthapuram.

8:20 am: The Election Commission (EC) cited the report of its general observer in West Bengal on Thursday to say voting was not disrupted at any moment at polling station number 7 in Nandigram, from where Chief Minister Mamata Banerjee is contesting.

8:00 am: The Election Commission has sought a report from Purba Medinipur district administration in connection with the alleged violation of prohibitory orders outside a polling booth in Nandigram's Bayal village during a visit by Chief Minister Mamata Banerjee, who is a contestant from the prestigious seat when voting was on Thursday, a senior EC official said.