Assembly Election Results 2021: The videos emerge despite the Election Commission's order banning victory processions after the declarations of results for elections in four states and one UT.

New Delhi | Jagran Politics Desk: No sooner had the trends suggested victory for the Trinamool Congress in West Bengal and DMK in Tamil Nadu, that the party workers and supporters started off with customary celebrations outside party offices in the two states.

Videos tweeted by news agency ANI showed TMC workers dancing outside party office in Kolkata's Kalighat with most of them blatantly avoiding use of face masks. A similar video clip from outside the DMK head office in Chennai showed women party workers eating sweets and dancing, while violating the COVID protocols.

#WATCH | DMK supporters continue to celebrate outside party headquarters in Chennai as official trends show the party leading on 118 seats so far.

Election Commission of India has banned any victory procession amid the #COVID19 situation in the country.#TamilNaduElections2021 pic.twitter.com/z6Fp5YRnKP

In Uttar Pradesh, where counting of votes for panchyat polls is underway, counting agents and supporters of various candidates in hundreds violated the COVID norms and creating unrest outside the counting centres in Hathras and Firozabad. The police personnel were forced to resort to lathicharge to control the crowd.

The poll body said it has taken serious note of the matter and has directed states to file FIRs in each such case and suspend the concerned SHO. "ECI takes serious note of reports coming in of congregation(s) of people to celebrate anticipated victory. EC has directed Chief Secretaries of all 5 states to file FIR in each such case, suspend concerned SHO and report action taken immediately of each such incidence," it said.

"Election Commission of India writes to Chief Secretaries of all States/UTs to "prohibit victory celebrations urgently". ECI also directs that responsible SHOs and other officers must be suspended immediately and criminal and disciplinary actions must be initiated against them," it added. 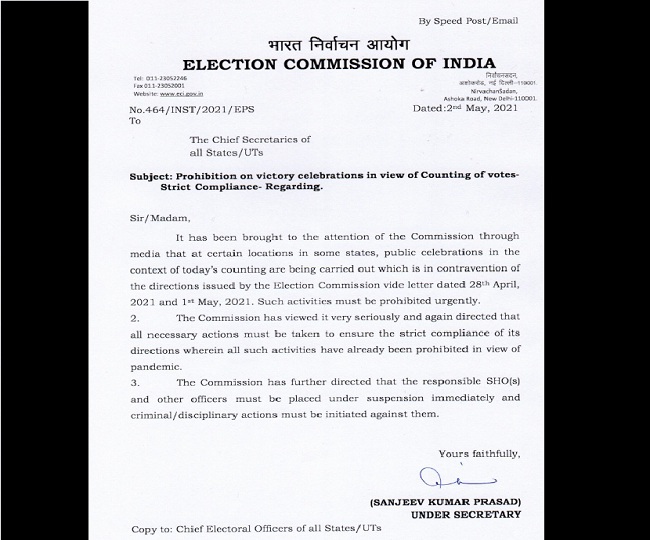 The videos emerge despite the Election Commission's order banning victory processions after the declarations of results for elections in four states and one Union Territory - West Bengal, Kerala, Tamil Nadu, Assam and Puducherry.

The decision came a day after the ECI faced flak from the Madras High Court over the violations of COVID-19 protocols during campaigning for the five Assembly elections. The court blamed the ECI for the second wave of the pandemic in Tamil Nadu and Puducherry.