Assembly Election Results 2021: As per the latest trends by Jagran, TMC is cruising ahead on 213 seats, while the BJP is ahead on 77 seats out of the total 294 seats in the state legislative assembly.

New Delhi | Jagran Politics Desk: West Bengal Chief Minister Mamata Banerjee defeated his former right hand Suvendu Adhikari in a see-saw battle on the Nandigram seat. Mamata defeated Adhikari by a margin of 1,200 votes as her party is all set to retain power in West Bengal for the third consecutive time.  As per the latest trends by Jagran, TMC is cruising ahead on 213 seats, while the BJP is going ahead on 77 seats out of the total 294 seats in the state legislative assembly.

As votes were counted for the assembly polls in four states and one union territory with strict Covid protocols in place, trends indicated that Tamil Nadu's ruling AIADMK could cede power to arch-rival DMK. In Puducherry, the AINRC-led NDA was headed towards power.

Exit polls have forecast a tight contest between the incumbent Mamata Banerjee-led Trinamool Congress and the BJP in the crucial West Bengal assembly polls and put the ruling saffron combine ahead in Assam while projecting that the Left alliance will retain Kerala, a feat unseen in four decades.

Here are the higlights of Assembly Election Results 2021:

18:45 pm: The news that the swearing-in ceremony will take place tomorrow is not true. The resignation will be submitted when I reach Thiruvananthapuram tomorrow. The rest will be decided after discussion with the party and the Front: Kerala CM Pinarayi Vijayan

18:35 pm: Bharatiya Janata Party will form the government and the CM will also be from BJP, to continue development in the State: Assam Minister and BJP leader Himanta Biswa Sarma

18:30 pm: One FIR has been filed in Tenyampet police station in T-Nagar district, Greater Chennai against cadres of a political party who had burst crackers near their party headquarters. The inspector of Teynampet PS has been placed under suspension for dereliction of duty: ECI

18:20 pm: Don't worry about Nandigram, I struggled for Nandigram because I fought a movement. It's ok. Let the Nandigram people give whatever verdict they want, I accept that. I don't mind. We won more than 221 seats & BJP has lost the election: West Bengal CM Mamata Banerjee

17:40 pm: We are grateful to the people for this landslide victory. I have to start working for COVID19 immediately. The swearing-in will be a low-key event because of the prevailing COVID19 situation: West Bengal CM Mamata Banerjee

17:15 pm: I would like to thank everyone. I request all to not take out victory processions. I urge everyone to go back to their homes now. I will address the media after 6 pm, says Mamata Banerjee

16:00 pm: Mamata Banerjee has sent out a clear message -- that Modi Ji and Amit Shah Ji are not invincible. They can also be defeated: Shiv Sena MP Sanjay Raut

15:50 pm: EC Official trends | BJP candidate from Nandigram, Suvendu Adhikari leads by 6 votes after the 16th round of counting

15:20 pm: Counting has not slowed down, due to heavy load the server has slowed down. Counting is continuing in the constituencies without any let-up, says Election Commission

14:03 pm: Mamata Banerjee surges ahead of Suvendu in Nandigram by 2700 votes.

12:52 pm: Respective State Chief Secretaries have been asked to take immediate action to stop such gatherings: Election Commission of India to ANI.

11:39 am: As per the trends, it is clear that BJP will form the government in Assam: Assam CM Sarbananda Sonowal

11:20 am: Early trends not the real indicator of the final outcome. We will cross the magic figure by evening. I am sure that we will form the next government in Bengal

10:52 am: Too early to say anything because there are so many rounds. Situation will be clear only by evening. We had started from 3 and were challenged that we won't get even 100, we have crossed that mark. We will cross the magic number too: Kailash Vijayvargiya, BJP

09:25 am: In West Bengal, the half-way majority mark is 148. As of now, the BJP is leading on 94 seats while the TMC is ahead on 99 seats. The Congress-Left alliance is a distant third as it leads on 5 seats.

07:32 am: Officials, counting agents and others arrive at a counting centre at Siliguri College in Siliguri. 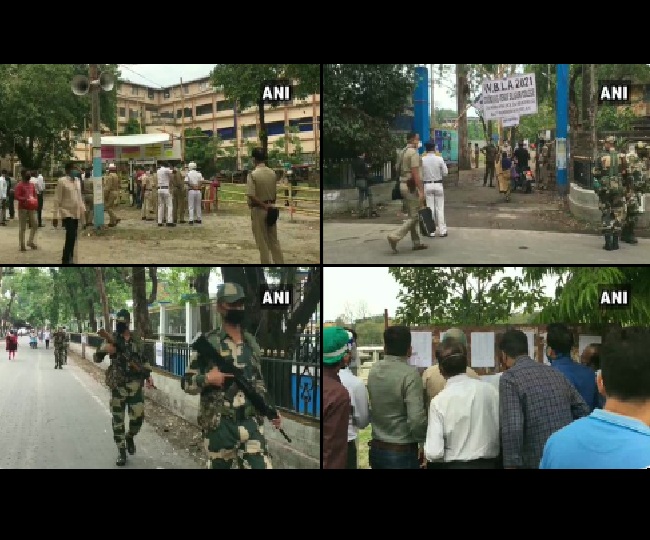 07:04 am: The counting of votes will begin at 8am in West Bengal, Tamil Nadu, Kerala, Assam and Puducherry. Postal ballots will be counted first

07:01 am: The ballot paper votes will be counted first followed by the EVM votes and the initial trends are expected to trickle down by 9 am.

06:54 am: Puducherry Assembly Election Results 2021: Outside visuals from a counting centre in Lawspet 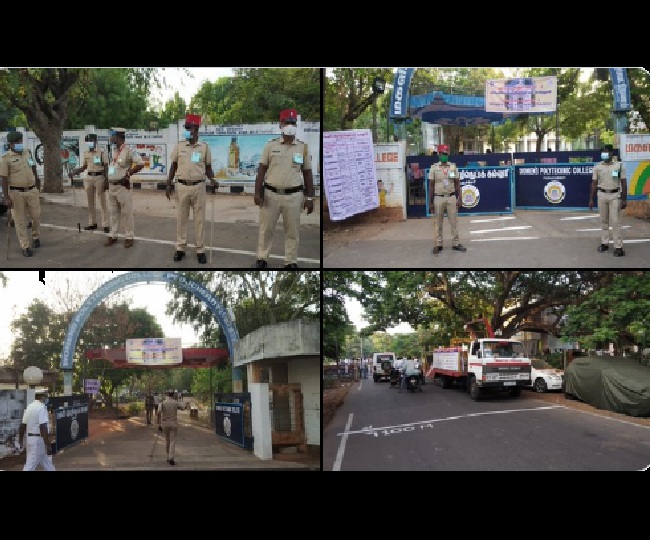 06:52 am: Tamil Nadu Assembly Election Results 2021: Outside visuals from a counting centre in Chennai. 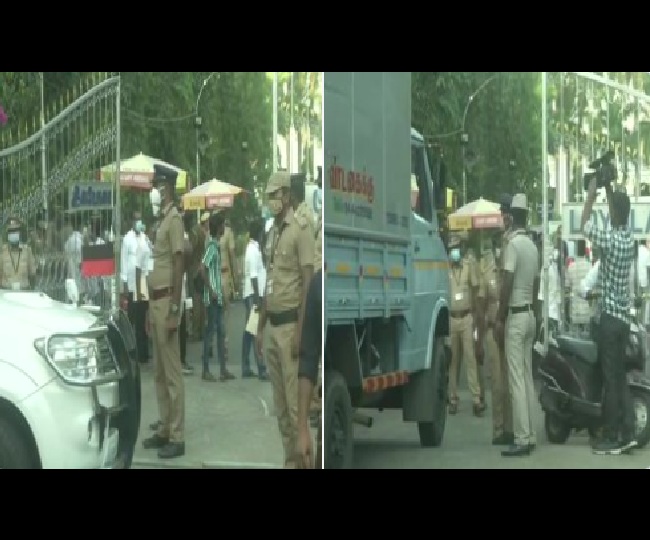 06:48 am: If the trends fall in line with the exit polls, the BJP and TMC may be involved in a cliffhanger with the state witnessing a hung assembly. In that case, the regional parties are likely to emerge as kingmakers in West Bengal.