Besides Madhya Pradesh, eight Assembly seats are up for polls in Gujarat, while by-polls are underway for seven Uttar Pradesh Assembly seats. Two seats each in Odisha, Nagaland, Karnataka, and Jharkhand are also voting in the by-elections today. The by-polls are also being held for one seat each in Chhattisgarh, Telangana, and Haryana. 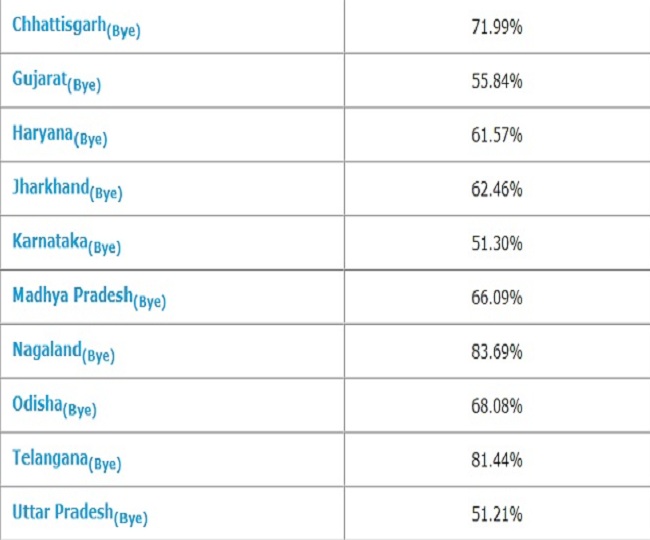 3:00 pm: Over 40 per cent of the votes were cast till 3 pm on Tuesday in the ongoing by-elections to seven assembly constituencies in Uttar Pradesh where 88 candidates are contesting.

2:15 pm: Over 55 per cent of the electorate had cast their votes till 2 p.m. for bypolls to the two assembly seats in Nagaland on Tuesday.

2:00 pm: We got reports of violence at few places away from polling booths. These incidents haven't affected polling. We're probing videos of firing and have arrested few people in one such firing incident: SP Morena Anurag Sujaniya on violence during by-polls in Morena, Madhya Pradesh.

12:30 pm: People of Madhya Pradesh know that Shivraj Singh Chouhan has just lied in the last 6 months and has done nothing for the development of the state. Voters will now give a chance to Congress to work for the state: Kamal Nath, Congress on by-elections

12:00 pm: Madhya Pradesh by-polls: Union Minister Narendra Singh Tomar and his wife Kiran Tomar cast their vote in Gwalior. Polling is being held for 28 seats in the state.

11:00 am: Nagaland Assembly by-polls: Voting underway for the by-election to Southern Angami-I and Pungro-Kiphire assembly constituencies of the state. By-poll voter turnout recorded at 36.98 % till 10 am.

10:45 am: Karnataka Assembly by-polls: 6.90 per cent voter turnout recorded till 10am in by-poll underway for two assembly seats in Karnataka - Sira and Raja Rajeshwari Nagar.

Sonipat: BJP candidate for by-election to the Baroda assembly constituency, Yogeshwar Dutt cast his vote at a polling booth in Bhainswal Kalan

He says, "This time people would vote for development."#Haryana pic.twitter.com/jyWBcesYBk

08:50 am: Gujarat Assembly by-polls: Kiritsinh Rana of the BJP cast his vote at a polling booth in Surendranagar.

08:00 am: Voting for 28 Assembly seats is underway in Madhya Pradesh. Visuals from polling booth no. 258 in Gwalior.

Madhya Pradesh: Voting underway at polling booth no. 258 in Gwalior for the by-election to the state assembly constituency.

Voting to be held on 28 assembly seats of the state today. pic.twitter.com/vOkUgvdfaC

07:30 am: Voting for bypolls on 54 Assembly seats across 10 states begins. Most of the seats - 28 - where by-polls are being held is in Madhya Pradesh.