Virat Kohli's new Twitter bio after becoming a father has got fans gushing over it; check what he wrote

Anushka Sharma and Virat Kohli tied the knot in a private affair in Italy in late 2017. It's been three years of their marriage and fans love their amazing chemistry.

New Delhi | Jagran Sports Desk: Indian captain Virat Kohli became a 'proud father' on January 11 as his wife Anushka Sharma gave birth to the couple's first child- a baby girl. Now, in a new development, the skipper has changed his Twitter bio that left his fans gushing over it.

The new Twitter bio of Virat Kohli reads, "A proud husband and father." The adorable celebrity couple became parents on Jan 11 and have made sure that they keep their daughter away from the public eye. They have also asked the media to not click any pictures of their child and have also sent them luxury gift hampers. 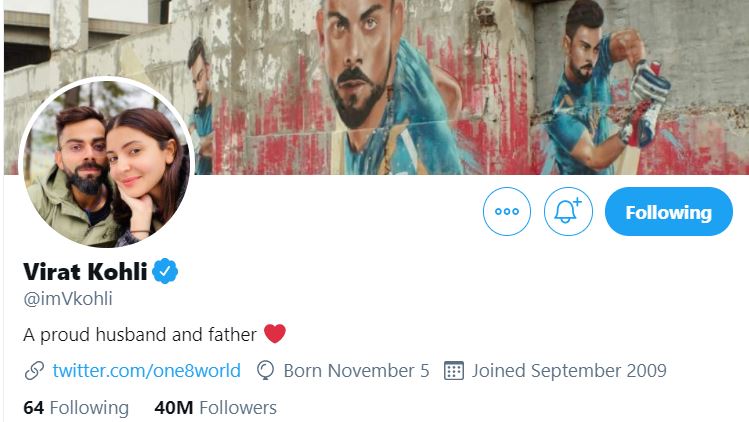 Virat, who accompanied Team India for the Border-Gavaskar Trophy against Australia, had return to India on a paternity leave just ahead of the delivery. Soon after his return, the Indian skipper announced the good news of becoming a parent on social media and shared a note in Hindi and English on January 11.

The note read, "We are thrilled to share with you that we have been blessed with a baby girl this afternoon. We thank you all for your love, prayers and good wishes. Anushka and the baby are both healthy and we are feeling beyond blessed to start this new chapter of our lives. We hope that you can respect our privacy at this time. Love, Virat.”

Anushka Sharma and Virat Kohli tied the knot in a private affair in Italy in late 2017. It's been three years of their marriage and fans love their amazing chemistry and calls them by the name 'Virushka'.