IPL 2022: Rumours of rift between the Chennai Super Kings and Ravindra Jadeja have increased after reports claimed that the CSK has unfollowed the 33-year-old all-rounder on Instagram.

New Delhi | Jagran Sports Desk: The 15th season of the Indian Premier League (IPL) has been tough for Chennai Super Kings (CSK) and Ravindra Jadeja. Jadeja was made CSK skipper after Mahendra Singh Dhoni resigned from his position, but the latter got the captaincy again after the former "relinquished" it.

Later, Dhoni took a veiled dig at Jadeja and revealed he was informed last season that "he will be given a chance" to lead the side this year. Dhoni further said "spoon-feeding doesn't help" a captain after several critics raised questions about Jadeja's captaincy.

Since then, reports have emerged that all is not well between Jadeja and the CSK. Now the rumours of rift have increased after reports claimed that the CSK has unfollowed Jadeja on Instagram. 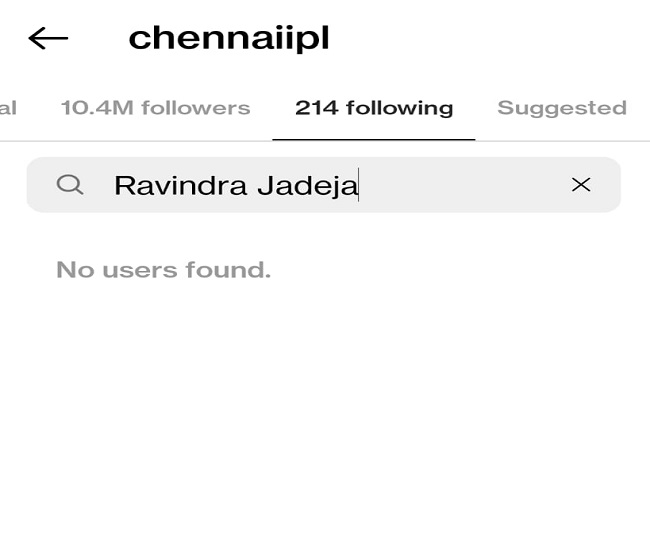 There is no word from Jadeja or the CSK on this as of now.

Meanwhile, there is no doubt that Jadeja's performance has also been affected by captaincy this year. Former India head coach Ravi Shastri has said that the lack of experience of leading a side might have affected Jadeja. Speaking on ESPNcricinfo's T20 Time Out, he said Jadeja looked a "fish out of water" while leading the CSK.

"He (Jadeja) is not a natural captain. He hasn't captained at any level. So, to give him the responsibility I thought was a little hard on Jadeja," Shastri said. "People might want to judge Jaddu, but it's not his fault. He hasn't captained anywhere. He looked a fish out of water, totally out of place and he's far better off playing as a player."

"He's one of the best around in the business, when it comes to allrounders. So let him just focus on his cricket. That [decision to give him the captaincy] cost CSK a few games early on. If you see the form they're in now, if they had this going early on, they'll be right up there in the mix," Shastri added.

PLT IN SECOND = 0.002682296
Jagran English brings you all the latest and breaking news from India and around the world. Get live English news from India, World, Politics, Entertainment, Lifestyle, Business, Education, Sports, Technology, and much more. Follow english.jagran.com to stay updated with the latest English news.
Copyright © 2022 Jagran Prakashan Limited.