The 13th season of the cash-rich Indian T20 league will start on September 19 in Abu Dhabi with an opening match between Rohit Sharma-led Mumbai and MS Dhoni's Chennai.

New Delhi | Jagran Sports Desk: The BCCI on Sunday announced the league-phase schedule for the 13th edition of its popular T20 league slated to be held in UAE from September 19. The 13th season of the cash-rich Indian T20 league will start on September 19 in Abu Dhabi with an opening match between Rohit Sharma-led Mumbai and MS Dhoni's Chennai.

Delhi will take on Punjab in the second match of the tournament on September 20 in Dubai. Indian skipper Virat Kohli's Bangalore will face David Warner-led Hyderabad in Dubai on September 21.

The action will then shift to Sharjah from Dubai, where Rajasthan will host three-time tournament champions Chennai on September 22. Sharjah will host a total of 12 matches while Dubai and Abu Dhabi will host 24 and 20 matches, respectively.

There will be just 10 double-headers in this year's tournament with the first one on October 3. During the double-headers, the first match will start at 3:30 PM (IST). There is also a slight change in the timing of the evening games and they will begin at 6 PM (local time). 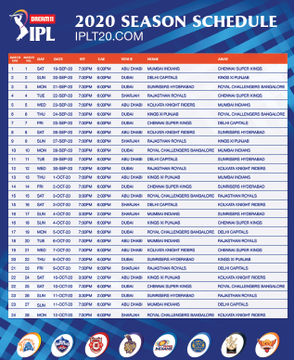 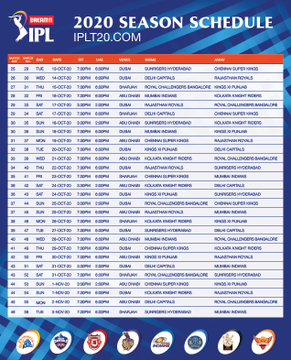 The last league match of the tournament will be played between Sunrisers Hyderabad and Mumbai Indians. However, the BCCI has not announced the dates and venues for the IPL 2020 playoffs and the final and the same will be released on a later date.