IPL 2020 Points Table: The Steve-Smith led side defeated Dhoni's CSK by seven wickets moving to the fifth position in the points table

New Delhi | Jagran Sports Desk: Rajasthan Royals (RR) registered a comfortable victory over Chennai Super Kings (CSK) in game 37 of the Indian Premier League at Sheikh Zayed stadium in Abu Dhabi on Monday. The Steve-Smith led side defeated Dhoni's CSK by seven wickets moving to the fifth position in the points table. So far, Rajasthan side has lost six out ten matches in the cash-rich league gaining eight points with a net run rate of -0.591. While Chennai has moved to the bottom of the table with its latest defeat. The squad has so far lost seven out of ten matches gaining only six points with a net run rate of -0.463.

The top spot has been grabbed by Delhi Capitals who have 14 points and a net run rate of +0.921. Mumbai Indians and Royal Challengers Bangalore are at the second and third spot respectively. 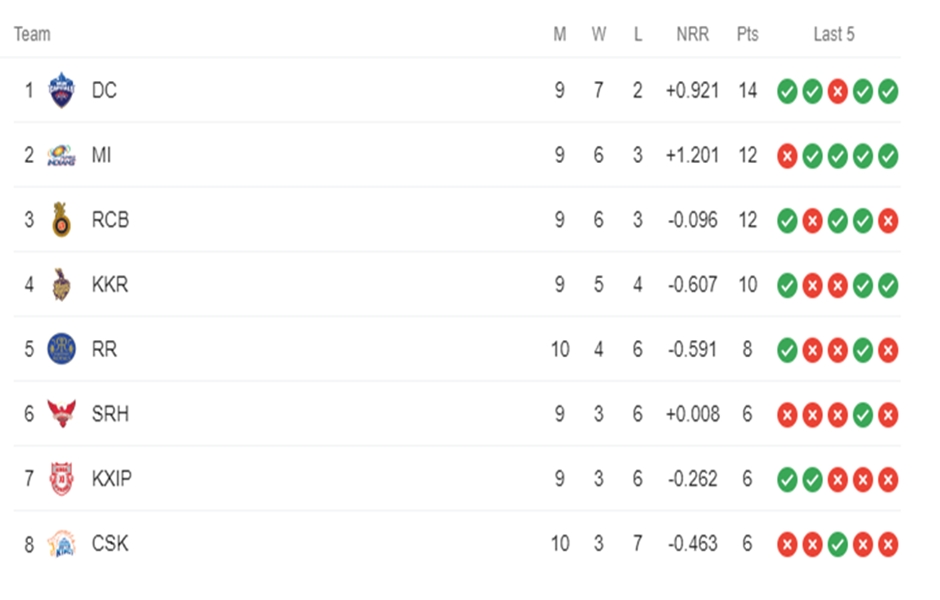 Kings XI Punjab skipper KL Rahul continues to be the top scorer of the tournament. He has scored 525 runs at an average of 75in nine matches. He is followed by his teammate Mayank Agarwal who has scored 393 runs in nine matches with an average of 43.66. Chennai Super Kings' Faf du Plessis holds the third spot in terms of highest run-getters in the tournament with 365 runs while Shikhar Dhawan of Delhi Capitals holds the fourth position with 359 runs. Royal Challengers Bangalore skipper Virat Kohli holds the fifth place with 347 runs.

Delhi Capitals' Kagiso Rabada is the top wicket-taker of the tournament. He has clinched 19 wickets at an average of 14.42 in nine matches. He is followed by Mumbai Indians' Jasprit Bumrah who has dismissed 15 batsmen in the tournament so far. Kings XI Punjab's Mohammed Shami holds the third place in terms of highest wicket-takers in the tournament with 14 wickets. Meanwhile, Rajasthan Royal's Jofra Archer is on the fourth spot. Archer has picked 13 wickets in ten matches, he has played so far.