IPL 2020 Points Table: With its latest win, Bangalore has moved to the second spot on the IPL points table.

New Delhi | Jagran Sports Desk: Royal Challengers Bangalore registered an easy victory against Kolkata Knight Riders in match 39 of Indian Premier League 2020. The Virat Kohli-led side thrashed KKR by eight wickets chasing down the 84-run target in just 14 overs. With its latest win, Bangalore has moved to the second spot on the IPL points table. So far, RCB has won seven out of ten matches in the cash-rich league gaining 14 points with a net run rate of 0.182. Meanwhile, the Kolkata side remained on fourth position despite losing out on points. The Dinesh Karthik-led side has so far won five out of ten matches gaining 12 points with a net run rate of -0.827. While Delhi Capitals continue to be on top spot with seven victories wout of ten matches, Rohit Sharma's Mumbai Indians slipped to third position having played lesser number of matches in the tournament.

Have a look at the updated points table 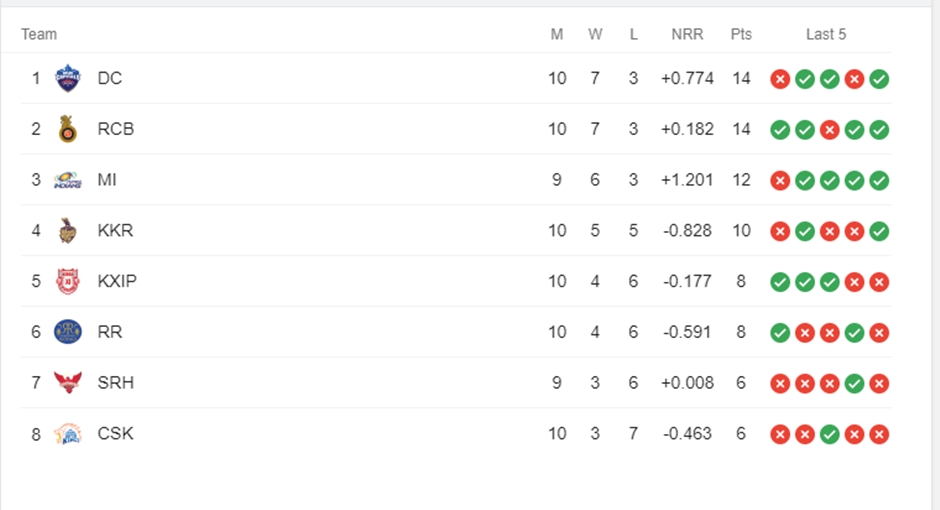 Delhi Capitals' Kagiso Rabada is the top wicket-taker of the tournament. He has clinched 21 wickets at an economy rate of 7.58 in ten matches. He is followed Kings XI Punjab's Mohammed Shami who has dismissed 16 batsmen in ten matches. RCB's Yuzvendra Chahal is on third position in terms of highest wicket-takers in the tournament with 15 wickets. Mumbai Indians' Jaspreet Bumrah is on fourth position with 15 wickets . Meanwhile, Rajasthan Royal's Jofra Archer is on the fifth spot. Archer has picked 13 wickets in ten matches, he has played so far.