IPL 2020 Points Table: Kolkata Knight Riders on Sunday defeated Rajasthan Royals by 60 runs and knocked them out of the tournament.

New Delhi | Jagran Sports Desk: Kolkata Knight Riders on Sunday defeated Rajasthan Royals in their final league game by 60 runs to keep their playoffs alive. With this win, Eoin Morgan's side has moved to the fourth place on the points table while Steve Smith's side are now knocked out of the tournament. Ending their campaign with seven wins from 14 matches, KKR now have 14 points with a net run rate of -0.214. On the other hand, Rajasthan Royals will finish the season with 12 points from 14 matches.

Earlier in the day, Kings XI Punjab were also knocked out of the tournament after Chennai Super Kings defeated them by nine-wickets. While KXIP will win finish the season with 12 points, CSK ended IPL 2020 with six wins from 14 matches.

Meanwhile, Mumbai Indians continue to be at the top of the points table with 18 points with a net run rate of +1.296. On the other hand, Royal Challengers Bangalore and Delhi Capitals hold the second and third spots respectively. Sunrisers Hyderabad are at the fifth spot with six wins from 13 games. 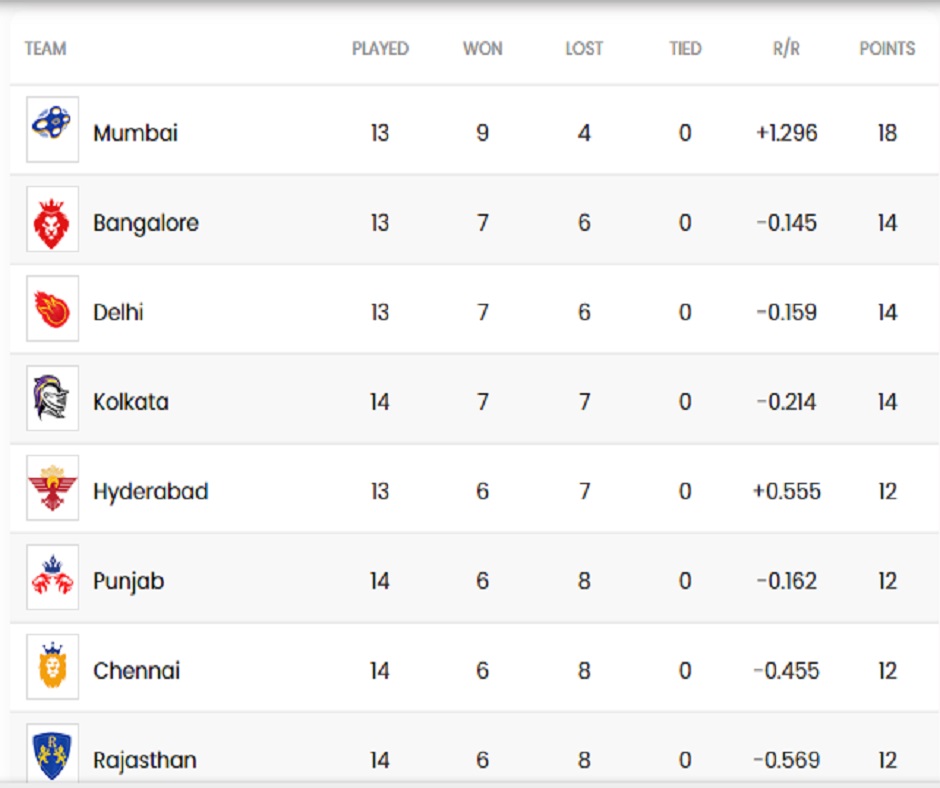 Kings XI Punjab skipper KL Rahul holds the orange cap with 670 runs at an average of 55.83. He is followed by Delhi Capitals' Shikhar Dhawan and Chennai Super Kings' Faf du Plessis who have scored 471 and 449 runs respectively. Meanwhile, Sunrisers Hyderabad skipper David Warner has scored 444 runs in the tournament so far while Kolkata Knight Riders' Shubman Gill has 440 runs under his belt.