New Delhi | Jagran Sports Desk:  Delhi Capitals have registered a 13-run win against Rajasthan Royals in match 30 of the Indian Premier League 2020. The latest victory has helped Delhi squad climb to the top of the IPL points table with six victories in eight matches of the tournament. The Shreyas-Iyer led side have so far gained 12 points with a net run rate of -0.999. Meanwhile, Rajasthan Royals continued to retain the second last spot after losing its fifth match in the tournament. The Steve Smith-led side have so far gained six points with a net run rate of -.844.

Delhi Capitals today edged past Mumbai Indians which currently have won five out of seven matches at a net run rate of 1.327 and have earned 10 points in the cash-rich league so far. 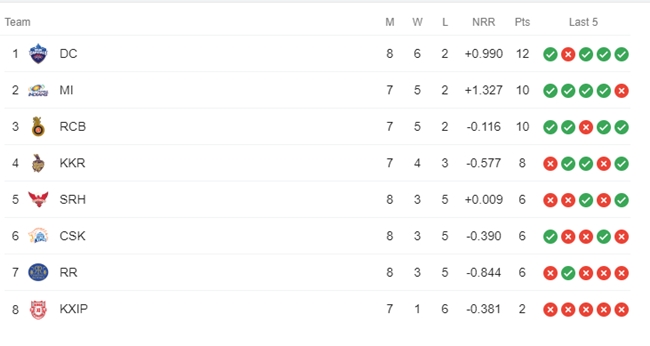 KL Rahul continues to be the top scorer of the tournament. The Kings XI Punjab skipper has amassed 387 runs in seven matches with an average of 64.50. His teammate Mayank Agarwal holds the second position with a score of 337 runs in seven matches. CSK's Faf du Plessis and SRH's David Warner hold the third and fourth spot with 307 and 284 runs respectively while SRH's Jonny Bairstow is just behind Warner with 280 runs.

Delhi Capitals' Kagiso Rabada holds the purple cap with 17 wickets in seven matches with an economy rate of 7.69. He is followed by Mumbai Indians' Jasprit Bumrah and Trent Bould who have taken 11 wickets in seven matches. The fourth and fifth position in the list of highest wicket-takers in held by Mohammed Shami (10 wickets) and Rashid Khan (10 wickets) respectively. Yuzvendra Chahal has managed to dismiss 10 batsmen in eight matches with an economy rate of 7.07.