IPL 2020 Orange Cap and Purple Cap holder list: Check the latest changes in IPL points table, along with the highest run-scorer and wicket-takers

New Delhi | Jagran Sports Desk: Chennai Super Kings defeated registered a comprehensive six-wicket victory over Kolkata Knight Riders in the 49th match of Indian Premier League 2020 at the Dubai International Cricket Stadium. Notwithstanding the latest win, CSK remained at the bottom of the points table having won five of thirteen matches it played in the tournament. Kolkata also retained its fifth spot despite suffering a defeat with 12 points and a net run rate of -0.467.

Mumbai Indians continue to be numero uno with eight victories in the tournament so far. The Rohita Sharma-led side have made it to the qualifiers and garnered 16 points with a net run rate of 1.186. Royal Challengers Bangalore is on the second spot on the points table. The Virat Kohli-led side have five out of 12 fixtures in the cash-rich league with 14 points in its kitty. 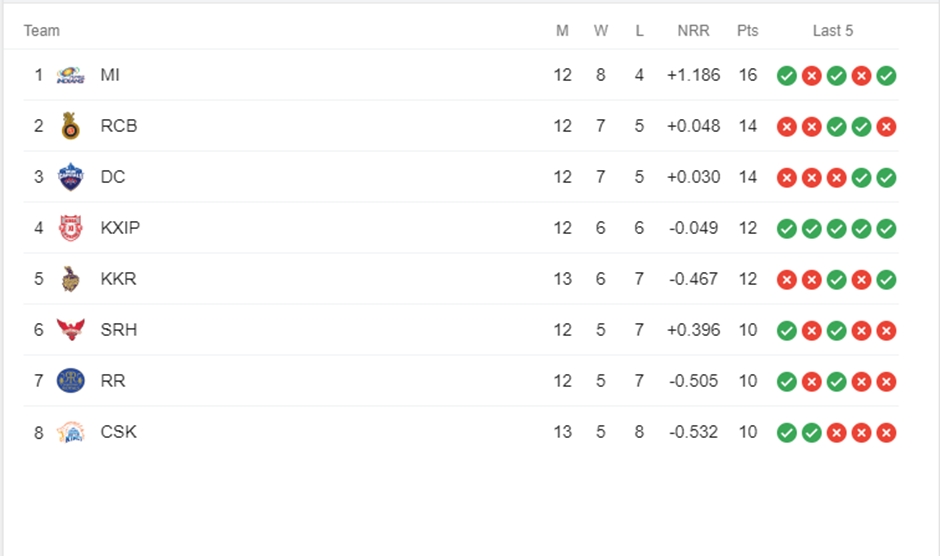 Delhi Capitals' Kagiso Rabada is the top wicket-taker of the tournament. He has clinched 23 wickets at an economy rate of 8.13 in ten matches. He is followed by Jasprit Bumrah, who completed 100 wickets in IPL after dismissing Royal Challengers Bangalore's Virat Kohli for just 9 on Wednesday.

Kings XI Punjab will take on Rajasthan Royals in game 50 of the Indian Premier League 2020 at Abu Dhabi's Sheikh Zayed Stadium on Thursday.