IPL 2020 Points Table: After beating Kings XI Punjab, Chennai Super Kings have climbed to the sixth spot in the points table of the IPL 2020.

New Delhi | Jagran Sports Desk: After losing three back-to-back games in the 13th season of the IPL, Mahendra Singh Dhoni's Chennai Super Kings on Sunday defeated KL Rahul's Kings XI Punjab to register their second win of the tournament. With this win, Chennai Super Kings have moved to the sixth spot while Kings XI Punjab have reached the bottom of the points table of IPL 2020.

However, Rohit Sharma-led Mumbai Indians hold the top spot with six points while Shreyas Iyer's Delhi Capitals are at the second spot. Royal Challengers Bangalore hold the third spot while Kolkata Knight Riders and Rajasthan Royals are at the fourth and fifth position respectively. Sunrisers Hyderabad, meanwhile, is the seventh spot of the IPL 2020 points table. 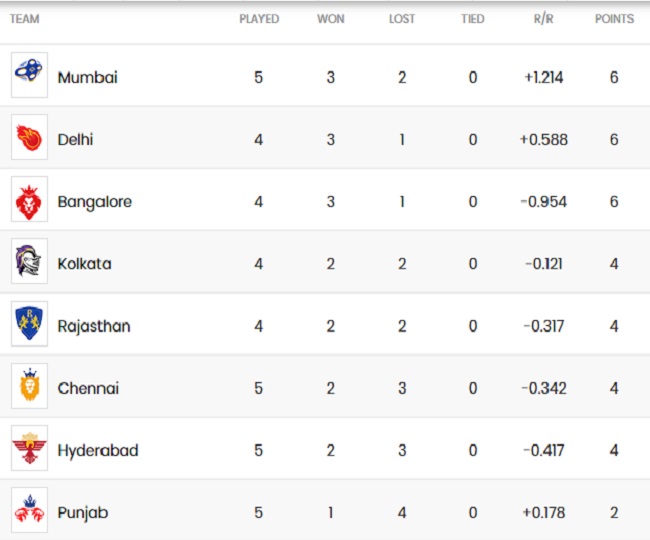 What about the orange cap holders of IPL 2020?

Currently, Mayank Agarwal of Kings XI Punjab holds the orange cap with 246 runs. He is followed by own teammate and skipper KL Rahul who has scored 239 runs. Faf du Plessis and Rohit Sharma have scored 195 and 176 runs respectively. David Warner, meanwhile, has scored 175 runs in IPL 2020 so far.

Devdutt Padikkal and Sanju Samson have scored 174 and 171 runs respectively while Shreyas Iyer has been able to score 170 runs in the tournament so far. Kieron Pollard is at the ninth place with 163 runs while Ishan Kishan at tenth with 158 runs.

What about the purple cap holders of IPL 2020?

Yuzvendra Chahal of Royal Challengers Bangalore holds the purple cap with 8 wickets at 14.38 average. He is followed by Mohammed Shami, Kagiso Rabada and Trent Boult who have also taken 8 wickets each at an average of 14.75, 15.75 and 19.62 respectively.