New Delhi | Jagran Sports Desk: Team India skipper Virat Kohli, who is famous for his aggressive behaviour on field, looked in a completely different mood at Bengaluru on Sunday. He was spotted in a playful state of mind making child-like gestures ahead of the third T20I in front of home crowd owing IPL franchise RCB led by Virat. Though the incident is not yet clear on what made him react in that way, the Instafam is loving the picture posted by Indian Cricket Team with the caption, "Kids these days." 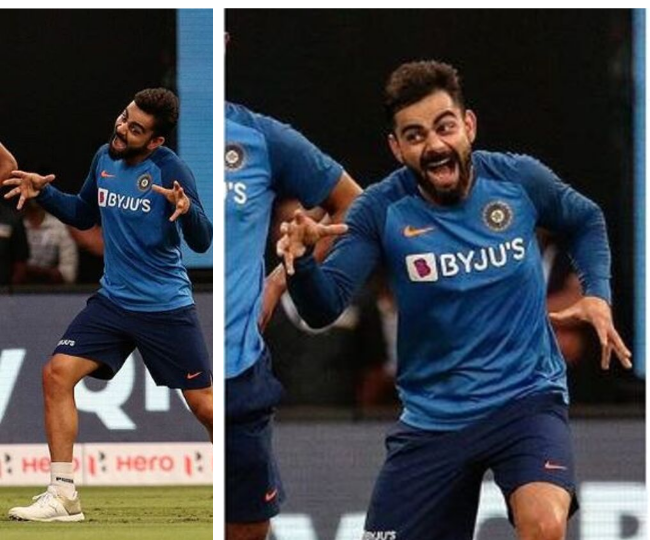 One of the fans wrote, " Sher aaya sher", "Omg he's so cute," replied another. The skipper was seen in a jolly mood during the Caribbean series where he and wife Anuskha shared pictures one after another at its beaches.

The skipper was phenomenal in the second T20I scoring an unbeaten 72 runs. He also went past Rohit Sharma's T20I score in that match but failed to perform well in the third T20I. The overall performance of team India wasn't too good either. The decision to bat first was backfired as they could only manage 134/9 in 20 overs. Proteas registered an emphatic victory over the hosts by winning the third T20I by 9 wickets and levelled the series 1-1. Kohli had said that he wanted to challenge the team by taking them out of their comfort zone.

In the post-match ceremony, Virat praised South Africa's bowling and said that chasing is easier in T20 cricket. On team composition, he added, "We will try to get the squad composition right as soon as we can. At the moment the guys who have done well in domestic cricket are getting opportunities."