ICC ODI Rankings: Virat Kohli with his runs in India vs South Africa retains second spot in the list, meanwhile Rohit Sharma bagged 3rd position despite being ruled out of the series.

Virat Kohli, who was removed from Captaincy before India vs South Africa, On the duration of the tour, hit two half-centuries but failed to keep India on the winning side. Kohli scored 116 runs at a strike rate of less than 80 across 3 matches in South Africa. On the other hand, Rohit Sharma was ruled out Ind vs Sa series because of his hamstring injury and didn't play any matches.

Apart from Virat and Rohit, Opener Shikhar Dhawan, the leading scorer for India against South Africa with 169 runs, has moved up one place to 15th in the list led by Pakistan captain Babar Azam and Rishabh Pant is up to five places to 82nd.

In the elite batting chart of ICC South Africa batters Quinton de Kock and Rassie van der Dussen has made huge gains after helping their team complete a memorable 3-0 series win over India. 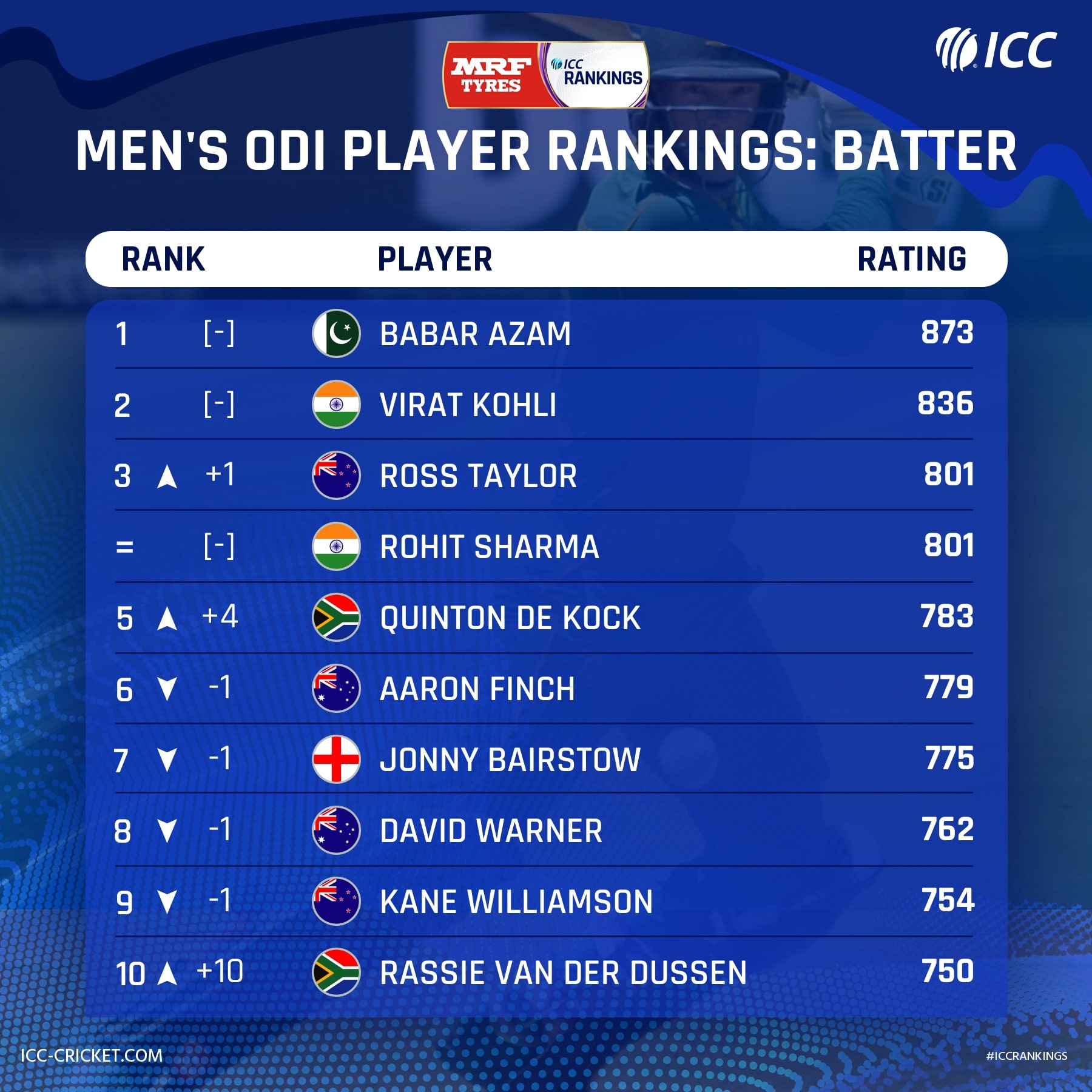 Afghanistan batter Rahmat Shah's aggregate of 153 runs against the Netherlands has lifted him seven places to joint-36th while Hashmatullah Shahidi is up to nine places to 53rd.

South Africa's bowlers too have significant gains in Wednesday's update. In the bowling charts, Jasprit Bumrah has retained the No. 7 spot South Africa’s Fast bowler Lungi Ngidi is back in the top 20 after five wickets in the series and spinner Keshav Maharaj is at a career-best 33rd position.

In the ICC Men's T20I Player Rankings, England batter Jason Roy's 45-run knock in the second match against the West Indies has helped him move up one place to 15th while West Indies' Brandon King is up 28 places to 88th thanks to his unbeaten 52 in the first match.

In theT20I bowlers' list, Jason Holder is up to a career-best 26th following his haul of four for seven that won him the Player of the Match award in the first match. His team-mate Akeal Hosein bowled economically to gain 40 places and reach 33rd after the first two matches.

PLT IN SECOND = 0.002927454
Jagran English brings you all the latest and breaking news from India and around the world. Get live English news from India, World, Politics, Entertainment, Lifestyle, Business, Education, Sports, Technology, and much more. Follow english.jagran.com to stay updated with the latest English news.
Copyright © 2022 Jagran Prakashan Limited.