Shares of this Patanjali subsidiary have registered 39,210 per cent returns in last 6 months; know if it's the right buy for you

On January 24, Ruchi Soya’s shares were valued at Rs 3.32 per share, but after 5 months, the company’s shares have shown unprecedented growth and is trading at Rs 1,367.20 per share today.

New Delhi | Manish Mishra: Amid the coronavirus pandemic when every company is facing a loss, a company has moved up to the mark and amazed everyone. We are talking about Ruchi Soya, which had been acquired by Baba Ramdev’s Patanjali, last year.

Earlier in January, precisely on January 24, Ruchi Soya’s shares were valued at Rs 3.32 per share, but after 5 months, the company’s shares have shown unprecedented growth and is trading at Rs 1,367.20 per share today. The company has registered a rise of 39,120 per cent.

From December 18, 2019, to June 23, 2020, shares of Ruchi Soya have given 39,119.88 per cent returns to the investors. For the past several days, its shares have been continuously in the upper circuit. Let us take a look at the movements of the stocks of this company in the small-cap category and know from the experts of the stock market if one can still invest in this stock?

Also Read
Indian Economy may contract 4.5 per cent in 2020 due to lockdown:.. 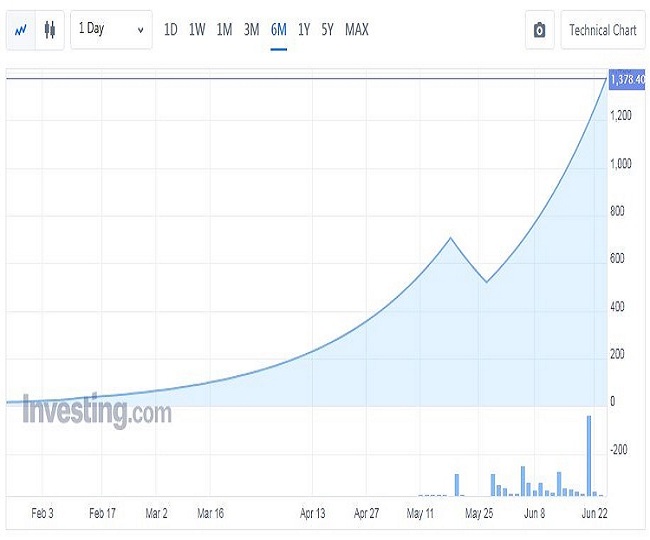 CNI Research CMD Kishore Ostwal said 99 per cent shares of Ruchi Soya were cancelled. In such a situation, if the price of the shares reaches the level of Rs 2,700 per share, then it will be its break-even point. Meaning, no profit-no loss situation for the company.

Ajay Kedia, founder and investor of Kedia Advisory, said that the stock is seeing a steady rise and it seems to be in the upper circuit. In such a situation, investors who want to make a profit by investing in it for a short period should avoid buying shares. If someone wants to invest for three to five years, then he should buy the shares of Ruchi Soya in small quantity.