New Delhi | Jagran News Desk: The International News Media Association (INMA) on Thursday released a list of 30 rising stars under the age of 30 in the global news media industry for 2020. Jagran New Media's Kartikay Khosla has also made it to the prestigious list. He is currently leading company's data analytics team. '30 Under 30 Awards' is part of INMA’s Young Professionals Initiative that selects candidates aged under 30 based early-career achievements, insights into innovation, ability to influence, and likely management skills.

INMA has announced the names of six winners each in five categories - Advertising, Audience, Business Intelligence, Content + Product and Leadership in the news media industry for the 'Young Professional Awards'. Khosla has been selected for this award in the Business Intelligence category. Along with Khosla, two more Indians have featured in the list of 30 professionals.

He began his career as a quality analyst at Times Internet Limited before moving to Jagran New Media as a product manager. During his tensure at that position, he created an automated in-house tool called Lead Management System, launched to handle education leads and data efficiently. 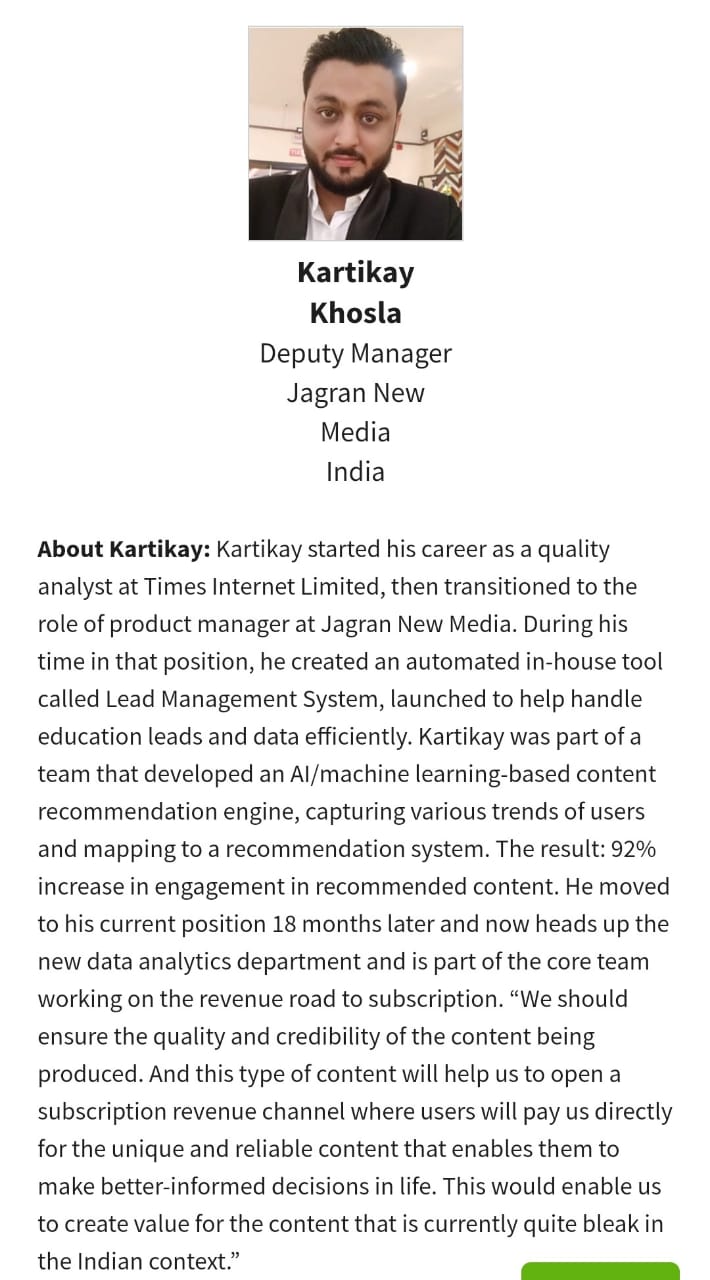 Kartikay was part of a team that developed an AI/machine learning-based content recommendation engine, capturing various trends of users and mapping to a recommendation system. He moved to his current position 18 months later and now heads the new data analytics department and is part of the core team working on the revenue road to subscription.

Kartikay strongly believes in creating the quality and credibility of the content. He says by creating credible content we can open a subscription revenue channel where users will pay us directly for the unique and reliable content that will help them make better-informed decisions in life.

PLT IN SECOND = 0.003446805
Jagran English brings you all the latest and breaking news from India and around the world. Get live English news from India, World, Politics, Entertainment, Lifestyle, Business, Education, Sports, Technology, and much more. Follow english.jagran.com to stay updated with the latest English news.
Copyright © 2022 Jagran Prakashan Limited.