Volkswagen Tiguan Review: The matrix LEDs are the latest fitment, which should be effective for all practical purposes. The new VW logo and a few re-touches up front keep the face of the Tiguan clean.

New Delhi | Anirban Mitra: Introducing Tiguan is not difficult. One of the most sold Volkswagen SUVs globally is also the company's flagship. Come 2022, the facelift version hits Indian roads, which now is powered by a 2-litre, TSI petrol engine. Albeit local assembly, VW Group is seeking a whopping sum of Rs 31.99 lakh (ex-showroom), which rekindles Tiguan's rivalry with Citroen C5 Aircross and Hyundai Tucson, alongside full-blown Toyota Fortuner and MG Gloster.

If the price hasn't put you off already, read along with our brief experience with the Tiguan. Tiguan's profile is marked by lines and understated creases that uphold Volkswagen's ageless design theme. The matrix LEDs are the latest fitment, which should be effective for all practical purposes. The new VW logo and a few re-touches up front keep the face of the Tiguan clean. 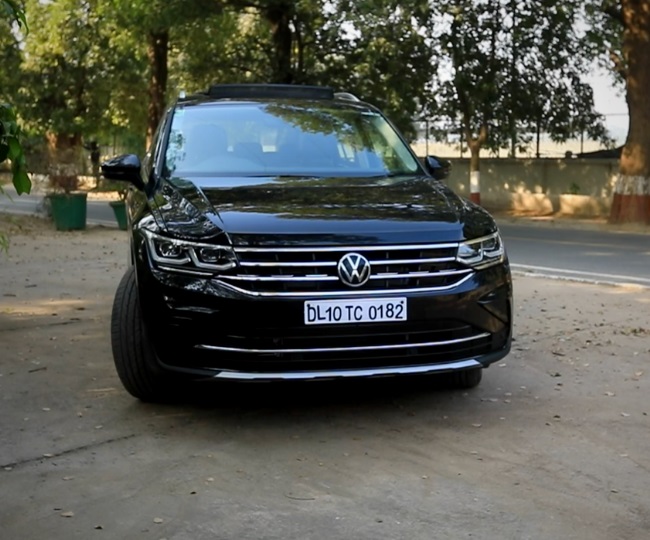 Tiguan is based on VW Group's MQB platform and the dimensions of the 4.5-metre-long SUV remains identical to the phased out model. A few other design revisions include refreshed 18-inch alloy shades, TIGUAN lettering on the electric tailgate and dynamic treatment to the rear lamps.

The suave, no non-sense design etiquette is carried forward to the cabin. Lack of space is never going to bother the driver or any of the passengers. The black leather upholstery exudes elegance, and the cushioning a sense of lounge.

A panoramic sunroof folds to the rear third and there is never a question of glass area. The cabin is airy, well-lit and in fact well-appointed. The 10-inch touchscreen is crisp and the tactile AC controls are inspired by the ones in Taigun. The driver's display is a fully-digital unit layout with adequate info in clear digits.

VW Group's petrol + electrification strategy post-BS6 emission switch has resulted in Tiguan's 2-litre TSI gain from an oil burner. The engine is capable of producing 190 PS and 320 Nm and the 7-speed DSG transmission sends out the power to an all-wheel-drive system.

Compared to the diesel Tiguan, the low-end torque rush is a miss. That said, the engine has strong pulling power from 2,000 to 6,000 rpm, which means the SUV could be a great companion for mile-munching.

The dual-clutch gearbox is crisp if not lightning quick. Upshifts are more seamless and natural than downs. Unhurried is the right choice of linguistic, the powertrain is as chivalrous as the aesthetics of the SUV. 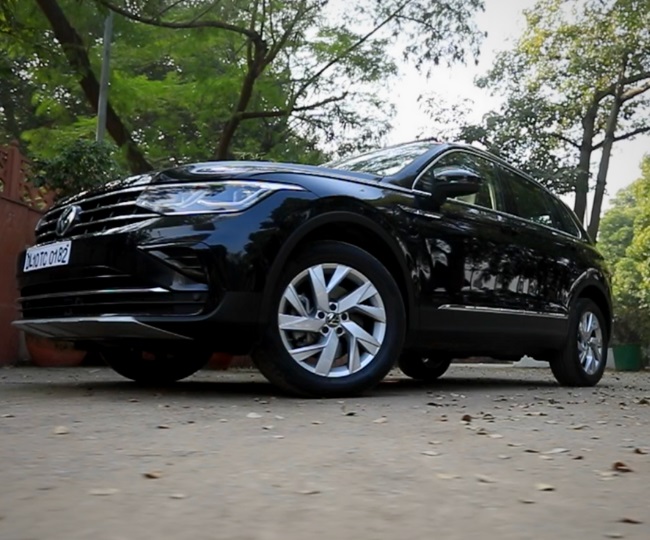 What's also likeable about the Tiguan is the excellent cabin insulation, which filters out external noise to a great extent. The ride is supple and braking duties are assuring, thanks to all-disc brakes.

Tiguan, in all likelihood, will not sell in thousands as the compact Taigun, but the flagship is suited for the ones who have an evolved taste, prefer exclusivity and admire German fit and finish.