Review: 2021 Yamaha R15 V4 continues to be an expensive yet sporty choice

The R15 V4 continues to be powered by the single-cylinder engine as the BS6 update. The power figure has marginally dropped and torque has nominally risen at 18.4 PS and 14.2 Nm.

New Delhi | Anirban Mitra: Japanese automaker Yamaha launched the fourth generation of R15 in India, which remains the sportiest motorcycle in its class for more than a decade.

The prices of V4 have, however, risen significantly by up to Rs 15,000, making it the most expensive motorcycle in its class. So, how does Yamaha justify the price? Read the review to find out:

1. Looks matters: The design of the new R15 is inspired by the bigger R7 and now gets a new fairing shape, which visually makes it appear like a litre-class sports bike. The racing blue edition is also refreshed, thanks to matte contrast.

2. Counting the drag: Aerodynamically, the R15 V4 is sleeker than the previous-gen V3. The new tank and fairing profile have reduced the drag coefficient. The aggressively-placed, clip-on handlebars have been dropped wider for better leverage. All these changes are at the expense of no weight gain. The V4 continues to tip at 142 kilos (kerb).

3. Mechanically ahead: Three key changes were done to the V4 to help it in standing apart from the crowd. The 37-mm front upside-down forks show great stability at high-speed cornering and otherwise. Yamaha has supplied a basic quick-shifter, which spurs the excitement just in time for quick acceleration. The R15 V4's addition of segment-first traction control (TCS) is raising eyebrows. Nevertheless, TCS is a safety kit and helps reduce the chances of eventuality.

Also Read
TVS Ronin 225 Review: One Strong Contender To Take Them All

4. M Badge: Yamaha's M edition of R15 V4 seeks a premium of around Rs 10,000 over the base model. With M in its stride, the R15 V4 looks like a different animal altogether. The R15M is unique in terms of a metallic grey paint job, with golden M badges on the bodywork. 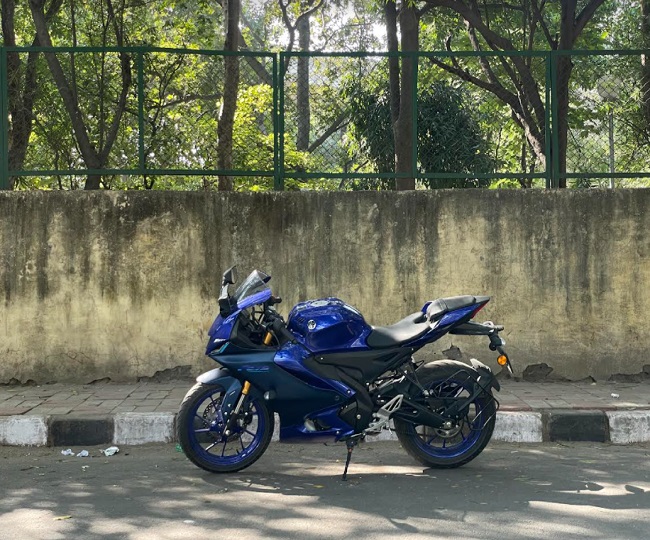 5. Y-connect yet?: Yamaha has updated the R15 V4 with its connected suite, which unlocks a host of features including location, engine health and phone pairing services. That said, turn-by-turn navigation is still a miss.

The R15 V4 continues to be powered by the single-cylinder engine as the BS6 update. The power figure has marginally dropped and torque has nominally risen at 18.4 PS and 14.2 Nm. The R15 V4 feels agile, revv-happy and fun-to-ride, thanks to VVA (variable valve actuation) tech. The clutch is slick, and quick shifter sweetens the deal.

Most cycle parts remain the same. In my books, the dual-channel ABS (F: 282 mm and R: 220 mm) needed to be worked on, which often are found wanting under heavy/panic braking conditions. The R15 V4 raises the bar of sportiness and continues to deliver to a youthful crowd like the way it has done for years.