BSA Motorcycles has revealed their first model Gold Star, which is a modern classic motorcycle.

New Delhi | Anirban Mitra: The new Gold Star retains the essence of its predecessor, such as the round headlamp sitting neatly below the signature twin-pod instruments – keeping the same proportions intact. Another notable feature is the chromed fuel tank with pinstriping and a dominating BSA Gold Star logo, which was inspired by the coveted ‘Gold Star’ pin won by Wal Handley in 1937, when he lapped the Brooklands circuit at over 100mph on a BSA Empire Star.

Add to that the engine cover that harks back to the BSAs of the past, the distinctive kink in the exhaust pipe and silencer design, rear fender with the trademark stays, and it’s clear that everything remains true to the iconic Gold Star design. BSA Motorcycles are attending Motorcycle Live, held 4-12 December 2021 at NEC Birmingham. They are exhibiting in Hall 4, Stand 4D10. 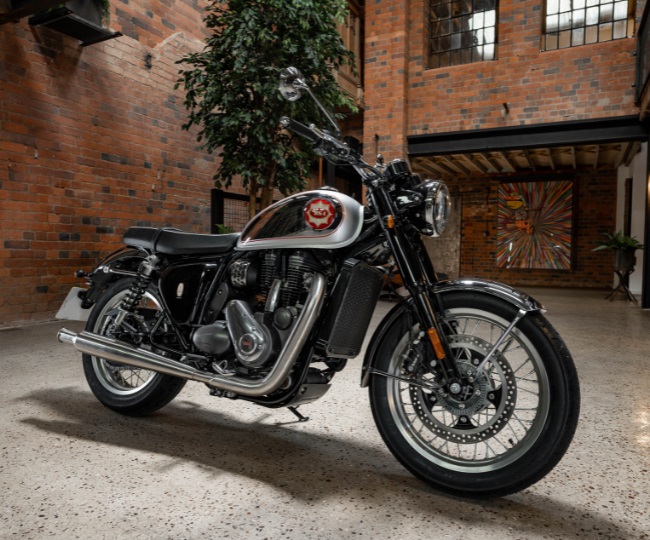 The twin-pod instruments feature individual analogue speedometer and tachometer units with LCD multi-functional display. The needles feature the same reverse sweep function as the original Smiths clocks. The separate tell-tale pod on the headlamp housing is another nod to the era gone by.

The fuel tank builds on the tank of the M24 and DB34 Gold Star, with similar chrome touches on the sides, an offset fuel filler cap and a dash of colour with a contrasting pinstripe. The BSA logo commands the same prominent position on either side. A lot of detail has gone into styling the engine, which is based on a pre-unit single and retains the same looks for authenticity.

Also Read
Minimum 6 airbags to soon become mandatory for vehicles carrying up to 8..

The new BSA Gold Star rides on wire-spoke alloy wheels –18-inch front and 17-inch rear. A flat seat not only complements the overall design but also works with the optimised handlebar and foot peg position to offer a seating position that’s commanding yet comfortable.

The rear is kept minimalistic, with a reimagination of the original Lucas lamps but with modern LED technology within. The signature fender stays – finished in chrome to complete the persona of the new motorcycle. The new BSA Gold Star will also be available in Legacy Edition, which is inspired by the Gold Stars of the past and finished in a special ‘Silver Sheen’ colour. 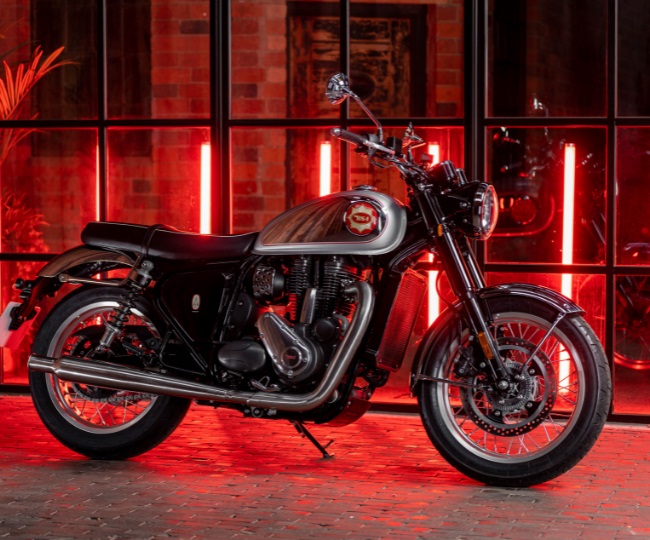 The other unique touches on the Legacy Edition include chrome-finished fenders, mirrors and levers, polished engine covers, white beaded seat and a gloss black finish on instruments, headlight cover and foot pegs, along with chromed components across the motorcycle.

The engine is liquid-cooled and features four valves operated by dual overhead camshafts, yet it also sports the classic fins dating back to the Gold Star’s original air-cooled engine.

This culminates in an engine that delivers a peak power of 45hp and peak torque of 55Nm. Designed for a ‘torquey’ feel throughout the rev range, the engine is made with just one objective – riding pleasure.

Forming the backbone of the new BSA Gold Star is an all-new dual-cradle chassis with a D- Loop integrated into the design; another signature element from the original model. The front wheel is suspended via 41mm telescopic forks while the rear features a traditional swingarm with twin shock absorbers, featuring a 5-step preload adjustment.

Braking is handled by Brembo featuring a single 320mm disc at the front and 255mm disc at the rear, and equipped with Continental dual-channel ABS.

Anupam Thareja, Co-Founder – Classic Legends, commented, “The new BSA Gold Star was designed in the UK, engineered in the UK, industrialized in the UK but most importantly, imagined in the UK. We have envisioned this bike as an ode from the UK to the world."

"BSA is not a motorcycle, it’s a thought, a liberating feeling, a philosophy, its love. That’s a love we want to transfer to you. This is an avatar that celebrates BSA’s, true motorcycling spirit.”

Ashish Singh Joshi, Director of BSA Company Ltd., added, “To stay authentic to its roots, the new Gold Star was designed and engineered in the UK. The new motorcycle incorporates BSA’s DNA and stays a Gold Star that is true to its lineage.”