On the second day of Asia’s largest automobile exhibition, Auto Expo 2020, Skoda Auto India unveiled its mid-size SUV concept VISION IN study, which is designed and developed under the ŠKODA AUTO led ‘INDIA 2.0’ project of the Volkswagen Group is based on the MQB A0 IN platform.

New Delhi | Jagran Auto Desk: On the second day of Asia’s largest automobile exhibition, Auto Expo 2020, Skoda Auto India unveiled its mid-size SUV concept VISION IN study, which is designed and developed under the ŠKODA AUTO led ‘INDIA 2.0’ project of the Volkswagen Group is based on the MQB A0 IN platform.

Along with the Vision IN, Skoda India also showcased the flagship SUV KODIAQ 2.0 TSI, the new KAROQ 1.5 TSI, the Sportline variants of the facelifted SUPERB, the powerful OCTAVIA RS 245, and the Monte Carlo and the Matte Concept of the RAPID 1.0 TSI. To commemorate its 125 year anniversary, ŠKODA AUTO also presented the luxurious 1948 SUPERB OHV.

Featuring a distinctive front and large bonnet, the VISION IN’s ŠKODA SUV family resemblance is clear at first glance. The wide ŠKODA grille features striking double slats; both the frame and the slats are made of lead crystal, and their elegance is additionally enhanced by eye-catching LED illumination. The two-part LED headlights also exhibit crystalline structures. In the upper part, which reaches as far as the ŠKODA grille, stunning glass elements create the LED dipped beam, LED high beam and an L-shaped LED module for the daytime running lights and indicators.

The straight roofline with panoramic glass roof and buffed aluminium roof rails conveys a sporty appearance at first glance. A three-dimensional tornado line makes the vehicle look longer, while the powerful wheel arches make it appear brawny and self-assured on the road. 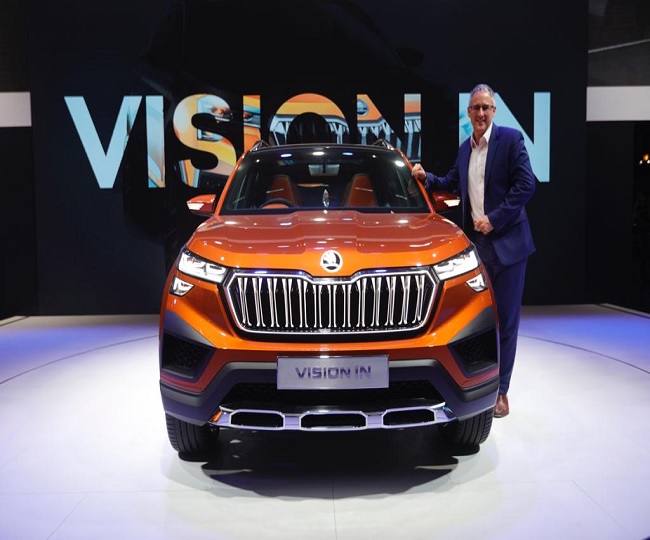 The interior of the VISION IN concept study is characterised by the new ŠKODA design language. The elongated dashboard picks up the symmetrical contours of the ŠKODA radiator grille and incorporates air vents featuring the brand-typical SUV design. An all-new crystal button on the dashboard acts as a bridge to the modern world: using this button, the driver can communicate with the infotainment system’s digital assistant in the same way they would if they were using the free-standing 12.3 inches (31.24 cm) central screen.

The VISION IN’s modern technological comforts also include the individually configurable Virtual Cockpit and shift-by-wire technology. The gear selector is no longer connected to the 7 speed DSG mechanically. Instead, it relays which gear has been chosen electronically. The classic selector lever has been replaced with a small rocker switch for operation. The convenient electromechanical parking brake means the familiar handbrake lever is also no longer required.