Skoda Kodiaq is available in three trim lines, and the features we judge and compare are of the range-topping L&K trim. Context set, let's dive into the premises of the SUV.

New Delhi | Anirban Mitra: A 7-seater SUV powered by a 2-litre petrol engine, it's wise to consider Kodiaq a niche in the market of Fortuners, Glosters, and to an extent Safaris and XUV700s. Yet, the demand has been robust such that Skoda Auto sold out the first batch of facelift Kodiaq within 24 hours of price reveal.

The Czech manufacturer pulled the plug on Kodiaq post-BS6 transition. Diesel is a thing of the past for Skoda, and the focus is set on the new 2-litre TSI petrol engine that also underpins the likes of Octavia and Superb.

Skoda Kodiaq is available in three trim lines, and the features we judge and compare are of the range-topping L&K trim. Context set, let's dive into the premises of the SUV. 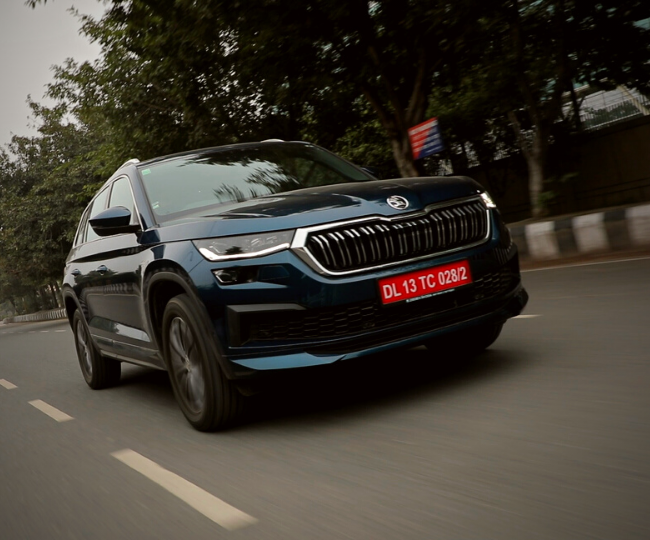 Mechanically, Kodiaq is largely identical as before. The 2-litre TSI petrol engine (190 hp and 320 Nm) is 40 units more powerful than the phased-out diesel engine. The initial torque rush is a miss, but the engine pulls cleanly from 1,750 rpm to almost 4,000 rpm. Invariably, the engine refinement is sweet as a marshmallow, and helping the building revs is the 7-speed DSG transmission.

The automatic transmission rows through the transmission, in either direction, with imperceptible slickness. Six drive modes to choose between, the drive can be turned into a breeze in sport mode. Skoda claims 100 kmph from standstill in less than 8 seconds. Heavy footedness, however, can take a toll on the mileage, which anyway should be around 10-12 kmpl in real life.

Aforementioned, Kodiaq is based on the MQB platform. The SUV doesn't ride on air suspensions, nevertheless, a great deal of engineering has gone into perfecting the ride quality. The ride is mostly supple, well-controlled over bad and broken patches, thanks to a technology Skoda likes to call Dynamic Chassis Control (DCC) system.

Also Read
Mahindra Launches XUV300 TurboSport In India, To Be The ‘Fastest’ In..

Kodiaq is built on a monocoque chassis, so the off-road mode is predominantly gimmickry. (An all-wheel-drive though!) The new two-spoke steering is beautifully judged, handling is direct and masks the weight of the SUV to a large extent. There is a fair bit of body roll when pushed to the extreme, however, Kodiaq isn't an SUV meant to cut corners.

Lastly, Kodiaq's cabin insulation is the one to beat. Partly due to the petrol engine as well, the noise creeping in is significantly filtered out.

Jump into the comfort of Kodiaq: 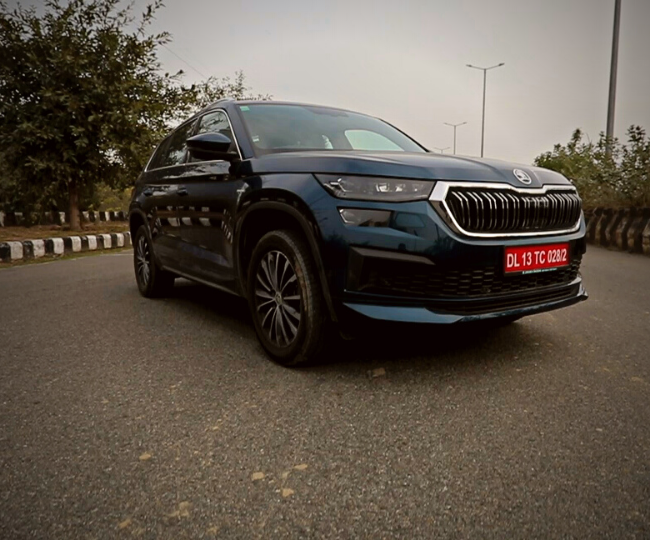 The focus has been to polish the interiors, which were anyway sophisticated and upmarket. Panoramic sunroof and large window sections throw in adequate light to highlight the dual-tone black and beige interior. Electrically-adjustable front seats are supplied with heating and cooling facilities.

The 8-inch touchscreen is connectivity-enabled and is smooth to operate. The horizontal matte panel on the dashboard seems to attract dust too often. Listen to music through the updated 12-speaker Canton stereo and allow your smartphone to charge up wirelessly as you immerse into meditative mile-munching on highways.

Though a three-row SUV, the third row is mostly for children to occupy. Six passengers abreast, the 2-litre TSI petrol should make light work of the journey.

There are a few changes as to how Kodiaq meets the eye. The hexagonal grille is flattened out, dynamic treatment to the 18-inch alloys and bold KODIAQ lettering at the rear, however, none of them are drastic enough to divide opinions. 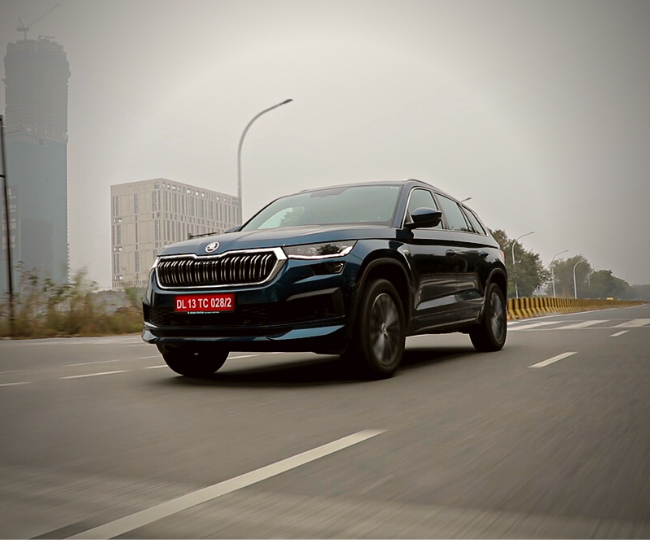 Skoda Auto will sell Kodiaq through the CKD route, assembling at its Aurangabad plant. The price is on the steeper side, and so is the lack of A-DAS features and a diesel engine. Having said that, Skoda Kodiaq isn't here to sell in bulk like the Kushaq. Skoda Kodiaq is for the ones who seek the refinement of petrol in a full-blown family SUV, and prefer standing out from the crowd.